We didn't stay up all night, but fortunately woke up around 2.30AM to see some of the stages of the Luna eclipse of the harvest moon from our bedroom windows. It was very impressive, framed above the chestnut trees across the road. 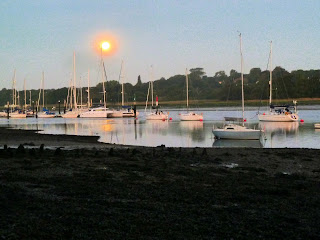 What with the eclipse, the harvest or what's being called the blood moon and the autumnal equinox we have really big spring tides at the moment. I wasn't up early enough for the 0.6m low water at 5.15AM , but I went for a run just after 6.00 and it was still unusually low.

For some reason we we have very low spring low water, but the high water at 4.9m was not massive, at other times of the year it seems to be the other way around. 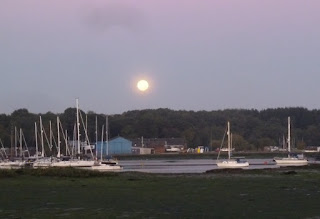 The last of the moon was still shinning brightly in the sky.

It's the second major eclipse Erica and I have seen, the previous one on September 16th 1997 in Madeira, which co coincidently was the anniversary of our first date, and which we celebrated over dinner of "steak on a stick" in a Funchal restaurant. But that's another story.
Posted by Bursledon Blogger at 06:30