Not your typical business travel

"Hello, you're going home already?"  The stewardess recognised me as we'd chatted and she had let me move seats when I'd flown out on a fairly empty transatlantic flight the day before. Having spent just over 24 hours in the US, I was flying home again, not your typical holiday maker on the London to Orlando route. 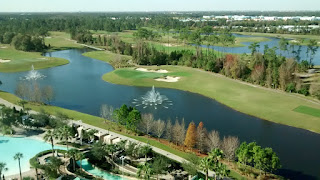 The air crew had a stop over, done some shopping, chilled by the pool. By contrast I'd had a business dinner when I arrived, a bunch of meetings all day and caught up on email in the departure lounge before boarding. The flight was jam packed with returning holiday makers and around 60 excited teenagers on a school trip (sure beats the geography field trip to Dorset that I remember from school).

Orlando isn't a bad place for business meetings while it's a cold and wet February back home, I managed to get an upgrade for which I was hugely grateful and I wanted to say thank you to the flight crew for making my "flying visit" a bit better.
Posted by Bursledon Blogger at 06:00 3 comments:

With the winds we've had of late it's all to easy for an open boat to fill and sink, or in this case capsize on an exposed mooring out in the harbour. 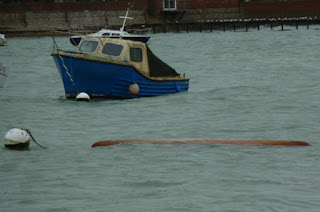 I'm curious to know what kind of boat this is, it looks like a canoe but I can't imagine why someone would leave a canoe out on a mooring. Maybe someone with local knowledge like fellow blogger Steve might know more? 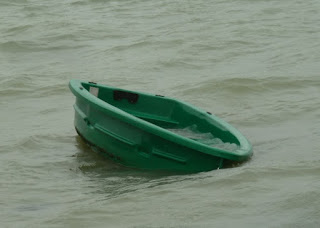 For some reason Missy reminds me of the 1960's Amphicar remember them? They had about the same amount of free board. 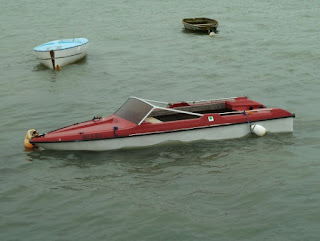 It's likely that someone with better local knowledge will pull me up on this. Sunday's brisk winds saw a few windsurfers heading out, down the channel from the end of Beach Road in Emsworth. 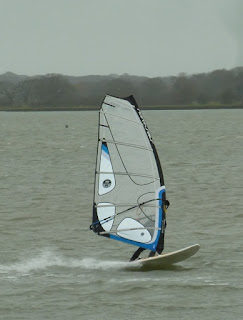 I think the channel is called Nore Rithe, it was definitely a reach and looked a whole lot of fun.
Posted by Bursledon Blogger at 20:22 4 comments:

While we were visiting Weymouth recently, we decided to make the short drive down to Portland Bill and the infamous race and over falls to the south of the peninsular. When sailing we always make a course well to the south to avoid the turbulent waters. Looking out from land even on a relatively settled day I’m in no doubt it’s been a wise decision 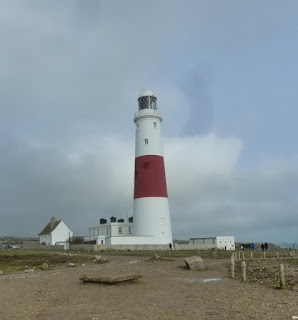 There’s been a lighthouse on Portland Bill to warn shipping since 1716, the present one dating from 1906. 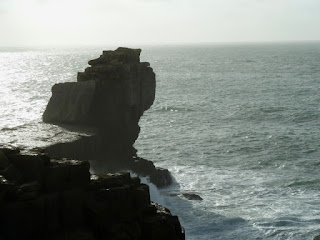 All around the island the remnants of quarrying can be seen, where Portland stone was extracted for the construction of many of the fine buildings in London. 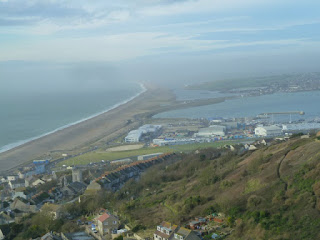 The view from the top of the island looking north, in fact it’s not an island as it’s joined by permanent causeway and road. To the left is Chesil beach which runs away north west to West Bay and Lyme Regis and provides protection for the Fleet the protected stretch of water which loks like a river and is now a nature reserve. At top right is Weymouth and to the centre right, Portland harbour once home to the navy and now redeveloped as the UK National Sailing Academy.
Posted by Bursledon Blogger at 06:00 3 comments:

With all the rain we've had over the past few weeks there's still been the occasional bright spot. 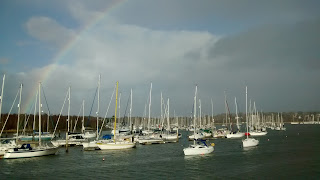 I headed off for a run on what seemed to be a bright morning, got soaked by a sudden and unexpected rain shower and then finished the run with the most amazing rainbow in view. 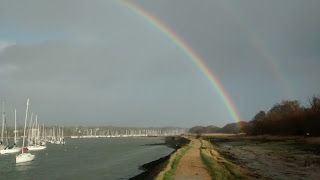 As the Scandinavians say "There's no such thing as bad weather, only wrong clothes". Not sure I entirely agree.
Posted by Bursledon Blogger at 06:30 No comments:

Joseph was at a birthday party over in Gosport, so while we waited for him we dropped in at Stokes Bay, not having been there for ages. The wind had dropped overnight, but it was still enough to kick up some breaking waves against the sea wall. 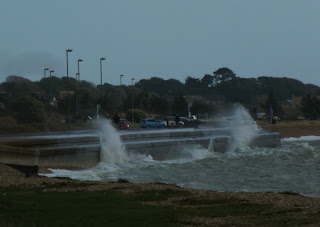 With high water and such great conditions there were a couple of kite boarders out having a great time, 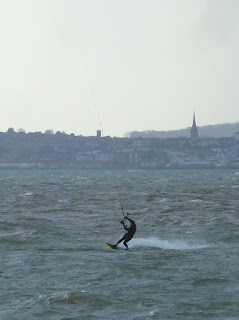 Although it did look a little chilly. 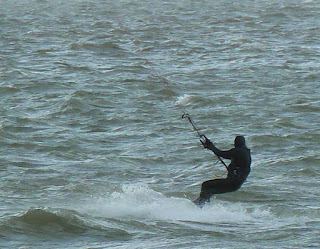 While we were down in Hamble watching the affects of the latest storm, we bumped into our friend and local boat builder Greg, He's building a new gaffer up at the Elephant and was a bit worried about the tent in which the boat's housed. 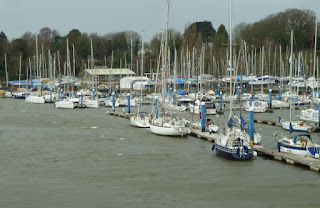 A bit later I was walking back from he fish mongers behind Bursledon bridge, so  I thought I'd take a look. Even at the top of the river which is pretty sheltered there were cresting waves as the ebb tide was running. 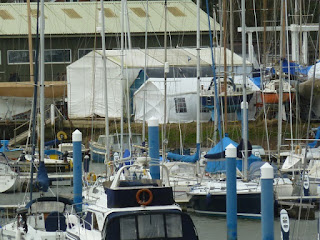 But as expected the tent was still there safe and if a little windswept, sound. But I couldn't help thinking that I wouldn't want to have my boat in or near the dry stack on the other side of the river, that's a lot of windage perched up top. 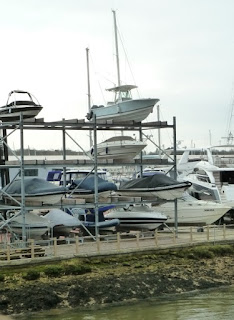 It was a wild and sometimes wet Saturday as the latest storm blew through. We had lunch down at the shack or as it's been renamed The Beach Hut Cafe  watching the SSW wind howling and pushing waves straight up the river. 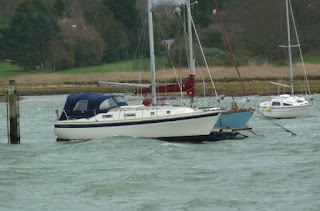 Out in the mid stream moorings things were pretty lumpy, with waves surging and bouncing boats around on their moorings, Fortunately these boats had been left to take the prevailing winter winds on the bow. 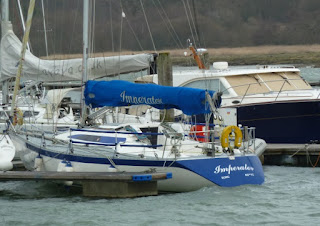 Not so this one in one of the marinas, the mooring lines were being worked very hard. 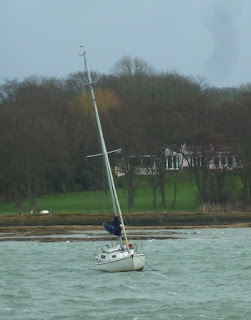 Probably the best river moorings are like the one above, there are no swinging moorings in Hamble as the harbour master likes to pack as many boats in as possible. Secured fore and aft this boat had settled beam on.

While we were eating we saw a 35 footer heading for the river entrance, hunkered down with a double reefed main. I suggested to Erica that maybe they wouldn't be out long and sure enough before we'd finished eating they were back. 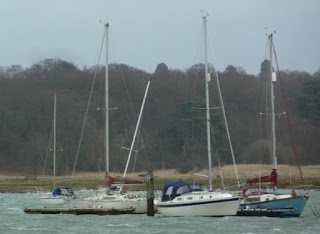 The boat at the back wasn't sinking, the waves had set up a bit of a Mexican wave running though the moorings which sent some boats depending on their hull and keel profile rolling, rolling, rolling.
Posted by Bursledon Blogger at 06:00 1 comment:

We stumbled upon this interesting boat in a local yard.  Some time ago I started a thread on the Wooden boat forum about Low Horsepower Planning Boats, which was very popular and has some very interesting boats on it, one of which is Ankle Deep a fast planning launch built by Uffa Fox. Not having seen the original but from the drawings and pictures this boat although much smaller has many similarities. 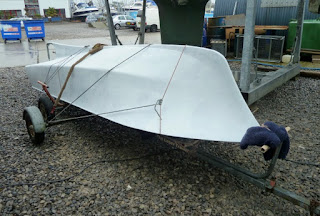 The bow is fine and flared and if not exactly wave piercing then looks well able to cut through the local Solent chop, while the rear sections are flat and certainly give the impression that they are able to plane. Quite different and unusual is the inboard engine, Ankle Deep by contrast had twin outboards. I'm guessing this boat to be around 12 to 14  feet, so curious to know it’s purpose, but alas there was no one around to ask. 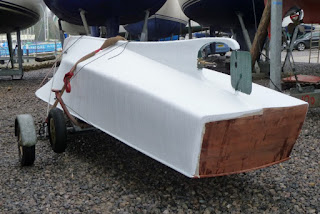 A brief window of high pressure at the dead of winter, the moorings are empty apart from one lone yacht. 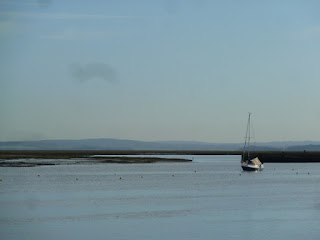 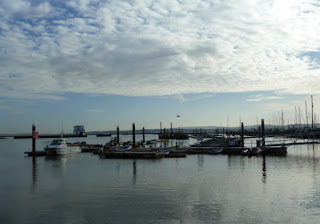 Realising that it’s been quite a few years since we visited and with a settled day in prospect we drove over to Weymouth in Dorset.

The town established itself as a seaside destination and no doubt increase its popularity with the coming of the railway in 1857, not least because of the glorious sandy beach which stretches away up to the Purbeck coast and being east facing in protected from the prevailing weather. 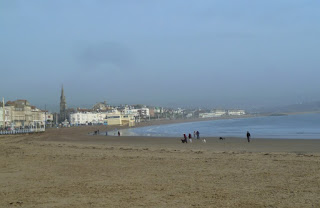 The river has always been my favourite part of town, when we started sailing, visiting boats would tie up along the wall and raft up. I remember one time the crew of a yacht inside us struggling up and down the ladder to take their huge Pyrenean Mountain dog ashore.

These days things are easier with floating pontoons and ramps installed for visitors. It’s a perfect place to sit and watch the comings and goings with plenty of café’s and bars right on your door step and the centre of town just a short walk away. 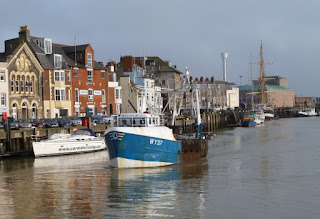 Places never look their best on a cold January day, but the town seemed very run down with many empty shops and air of neglect despite the investments made for the 2012 Olympics.

The Cutter Hotel caught my eye and seemed to sum up the situation, a fine old building which if located in Dartmouth or Padstow  would probably be a gastro pub run by a celebrity chef. 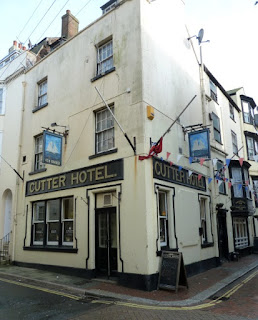