There are a few of these around Old Bursledon I believe purchased from Erith Yacht Club on the tidal Thames a few years ago which this one seems to confirm. 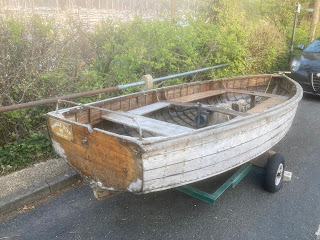 Nice to see a local boat returning home, although to date they seem to sit on trailers rather than sailing. 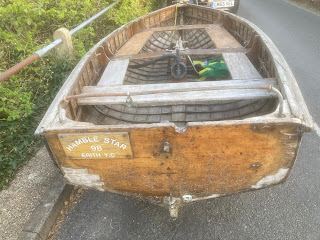 Hamble Star is a 4.3 m monohull sailboat designed by A. R. Luke and built by A. R. Luke/Elephant Boatyard (UK) starting in 1925. 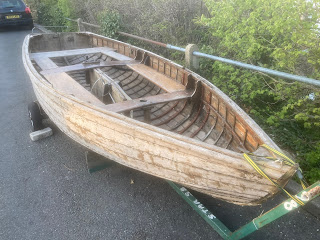 Can across this guy taking in the sunshine when I was on my daily walk down to the river from Holly Hill, presume it's a young slow worm. 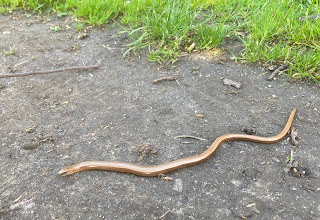 He seemed really happy, I guess as the dark path was warmed by the sun, but I moved him off to the grass in case a cyclist came along and didn't see him

Another old sketch I found among some documents, a trip to Le Mans in 1983, I was driving a rather old and asthmatic MG Midget, my friend Malcolm had a Sunbeam Tiger and "tricky Nicky" drove this Mk7 Jag. 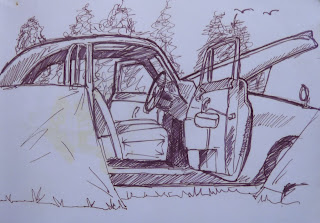 After the racing we drove up to Mont St Michelle where this was drawn,. The clutch operating arm on the Midget snapped and with no breakdown service, so I managed to drive all the way home with no clutch. My friend Mark would push to get the car rolling and then jump in as soon as it was in gear. Changing up and down gears was actually very easy once moving,  just heel and toe to match the revs. We dreaded stopping, but there were very few traffic lights in France in those days and we even managed to drive onto the ferry without having to stop.

Guess you couldn't get away with things like that these days, and that's a good thing given the traffic volumes and speed which we now take for granted. In case anyone is not familiar with "stick shift" and no clutch, you pull the car out of gear, rev the engine slightly until the rev's match and then the net gear should slip in effortlessly.

After what was probably some of the worst weather during May for may years, things brightened up in time for half term and our long awaited family holiday to Fowey. 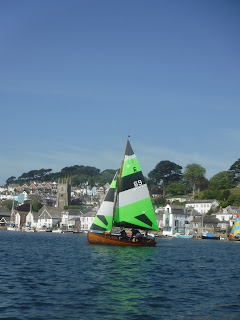 With almost a full week of uninterrupted sunshine in an idyllic location, it was a well needed and refreshing break. 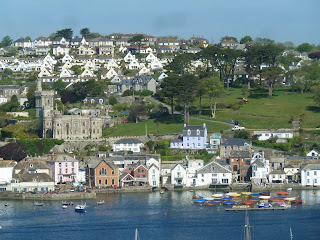 It's been 2 years since we last visited Fowey, the town is bouncing back from what must have been a hard 15 months, most of the shops and cafes were open, a few like Pink Murphy's which presumably wasn't viable with distancing due to little interior space and no outside space were still closed. The sailing club was open only to members and visiting yachtsmen. But the open air tables for dining and drinking in Market Street were great, hopefully something that will continue.

Being a bank holiday weekend we were treated to a bumper program of racing both the Fowey River class above and the Tory's passing by our balcony. I may have taken one or two photos to be posted once I've got some time to sort them all out.

I'd noticed an increase of people congregating along the fence of the donkey sanctuary and didn't give it much thought at the time, but all became apparent when I heard about Audrey seen here at a mere 3 weeks old. 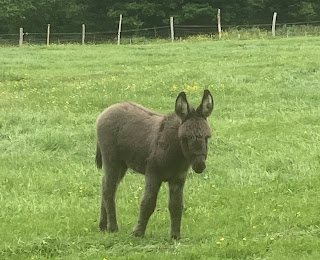 Not sure if this is actually camping, but an off grid shepherd 's hut on the banks of the upper Hamble seems like a great place for a weekend away. 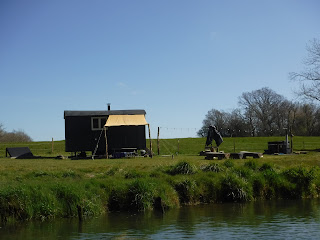 Complete with barbecue and outside hot tub and a short river trip to the Horse & Jockeys or up to Botley if the tide is right, might be a perfect get away.

I unashamedly like classic yachts and I especially like this one, big, powerful sloop with a sweeping sheer. 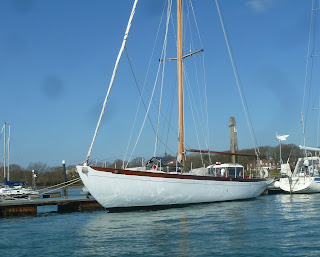 That raised dog house would be a great place to keep watch on a cold night passage or even just to stay warm and dry during early or late season sailing. 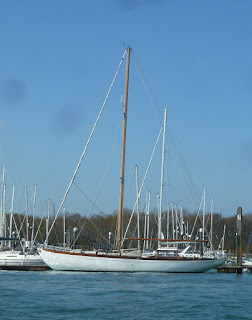 Lovely lines, the designer and builder created a boat that doesn't have a bad line or angle. 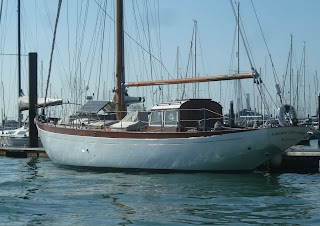 With all the full service marinas using sophisticated travel lifts for hauling boats, it's nice to see there is still some more traditional working equipment around 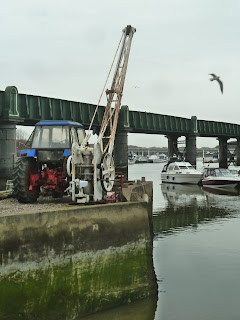 Curiosity finally got the better of me, I had a nagging feeling that no one was actually reading BB so I delved into the Google stats which was quite a nice surprise as we're not far off a million visits, which is small potatoes in the blogging world but what the heck . The seven and a half thousand or so visits per month was probably more encouraging - so thank you all for stopping by.

Peak viewing was 2016/17,  not sure what caused those viewing spikes back then, but the three Harlequin's in the Batman and Friends post might have had something to do with it.

This is the line up of most visited posts, the Diamond mystery boat has been there since year 1, so guess that's one reason it might have got some many. At the other end Valentine cookies had pretty much all the views in the week it was posted and none since.

I've been pondering if everything has gone to YouTube these days, but frankly I'm not very photogenic and have a terrible accent, so might stick to writing and photo's for a little while longer.