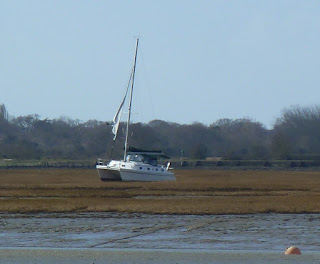 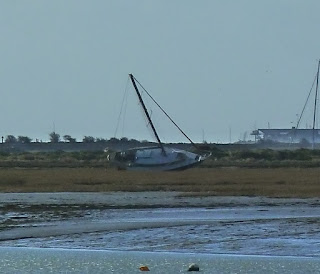 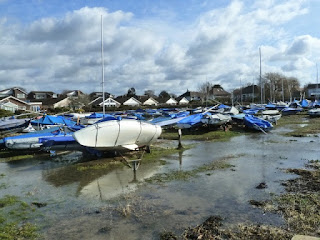 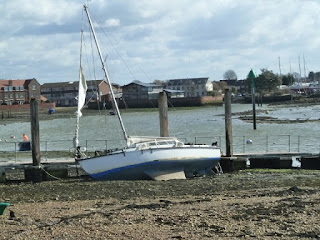 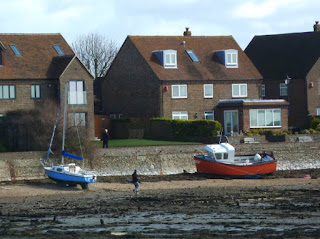 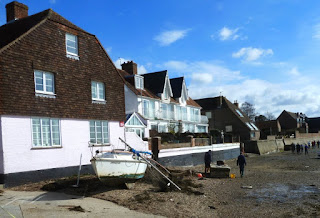 All in all one of the worst gales we've had in recent years, hopefully no one was hurt and the boats can get fixed.
Posted by Bursledon Blogger at 18:28 4 comments:

Making the most of the Easter Weekend

With gales, rain and storm Katy threatening the Easter holiday weekend I managed to get up and out early on Friday morning which promised some sunshine and light winds before the trouble bearing depressions swept in.

There was no one about at the yacht club and I had Tosh, our Cornish Cormorant rigged, in the water and away in no time for a sail over to Ashlett creek. 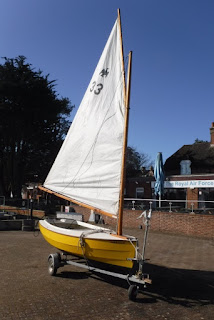 The wind had been falling all morning and just as I got back to Hamble in the early afternoon it dropped off to almost nothing as the wind swung around to the south. 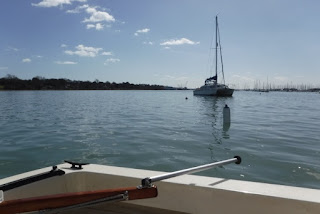 I couldn't decide if the  wind was going to pick back up, so after sailing back to the club on the slightest of zephyrs, I decided to go for a coffee down on the quay. 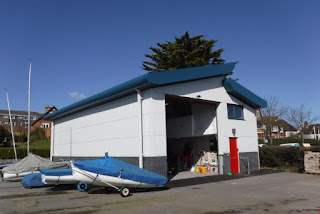 The new Hamble Lifeboat station had just opened, the build of he new facility has taken a long time, but now it's finished it's a huge improvement over the old shed. I chatted to one of the crew who were busy trying to put away all the equipment that's been in storage for so long. 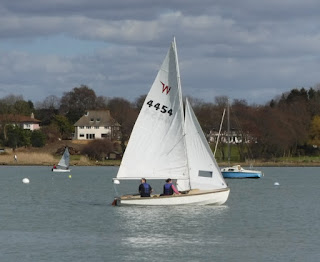 Friends James and Emma were launching their new to them Wayfarer and fortunately the afternoon breeze set in enough for them to get away in perfect conditions for a shakedown sail.

All in all a pretty perfect way to spend Good Friday while Joseph and Mum were away visiting Grandma and Granddad. 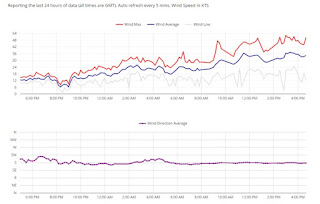 PS. Things were a bit different on Saturday afternoon with gusts up to 50 knots and rain, pretty typical bank holiday weather. 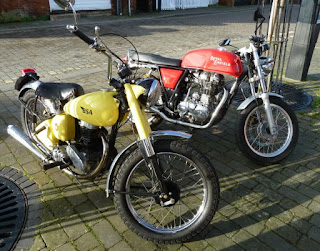 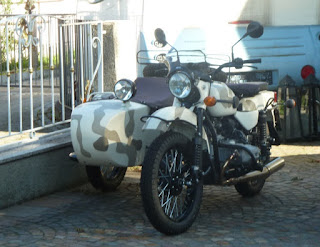 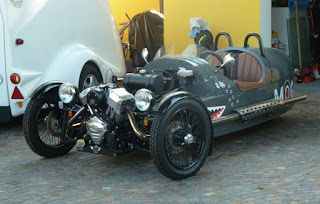 We haven't been over to Hardway on the west shore of Portsmouth harbour for ages, going back 20 years and more we used to keep a boat on a swing mooring in Bomb Ketch Lake out in the harbour. 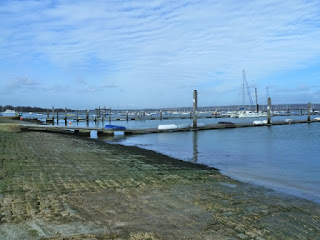 The main hard was built up during WW2 to embark tanks and military vehicles for the D Day invasion. 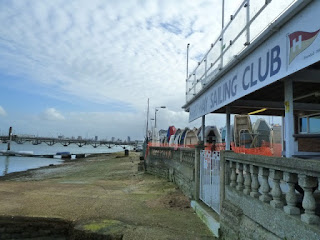 Hardway sailing club was founded in 1945, the clubhouse and compound occupy a prime position on the waterfront, leading to an extensive pontoon which provides access to the waters of Portsmouth harbour at all states of the tide. We were members back in the 1990's when there was very active dinghy and keel boat racing scene, probably still is. 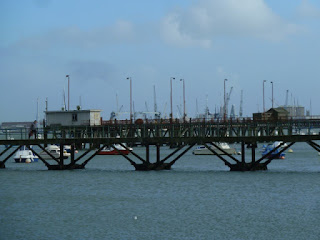 The industrial and military legacy of the area is all around, but it's no less a great spot, here with views across to the Portsmouth dockyards in the distance.

It wasn't until I was about to post this that I realised that I'd featured Last Laugh before, but she's looking spruced up and freshly painted and the name always makes me smile. 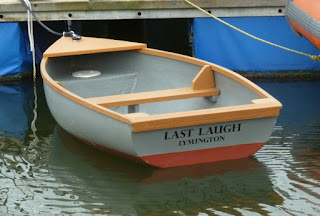 What a difference a week makes. After what has been a not especially cold but long, wet and windy winter, there is at last, a hint of spring with a fine clear day, very light wind, a perfect day for rowing. 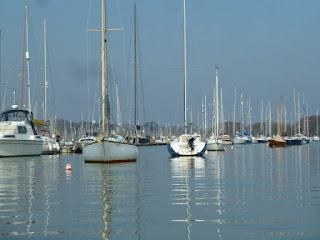 I pulled Gato Negro up on the foreshore just before HW, I'm note sure that we've ever been able to get any closer to the cafe. 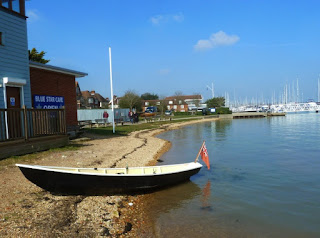 Earlier I was up and out early for my morning run at low water and despite the early fog, there were great views of what was one of the lowest tides I can remember 0.4M LW. With 4.8M HW at midday that's a 4.4m range or  nearly 14 foot six in old money. Sadly I didn't have my camera or phone with me in the morning. 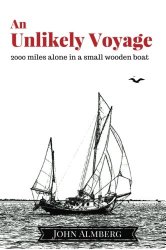 I finally found a few quiet moments to start reading, only to find I was past page 100 before I realised. What's good about John's writing is that he sets a good pace, neither too, much nor too little detail and does so in a way which so often relate to your own experiences, well mine at least. The dinghy which got loose, the outboard which fails at an inappropriate moment, tackling a difficult and new task with a Zen like approach (something I need to do more often).

I promised John I'd post a review once I've read  An Unlikely Voyage, but my advice is don't wait, go buy it now.
Posted by Bursledon Blogger at 08:39 No comments:

The mystery which is internet profiling cropped up again recently ( see here and here for previous comments). 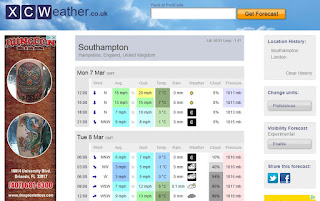 I'd just about forgotten my day trip to Orlando a couple of weeks ago, only to get a surprise when I checked the local weather forecast here in sunny Burseldon which featured an ad for Orlando's premier tattoo studio. It's a bit odd as neither I, nor Mrs BB have any kind of tattoo and I've only been to Orlando for one day in the past 12 years.

Of course Google may know something that I don't.
Posted by Bursledon Blogger at 06:00 5 comments:

I had a chance to practice some more local vernacular (Reet' Parkey). On Friday, having taken a day off work, under a bright blue sky and in spite of forecast for showers, I went for a row.

Just after I'd started on the return trip and about 3 miles from home, the sky grew dark, the wind picked up and the heavens opened - "coming down in stair-rods". For those not familiar, wooden or metal rods were used to secure carpet to stairs year ago, probably dating back to Victorian times, but I can just about remember them from when I was very young.

Needless to say it's a good metaphor for heavy rain. In fact on the day, it was so cold there were hail stones, but I don't remember any slang for those. 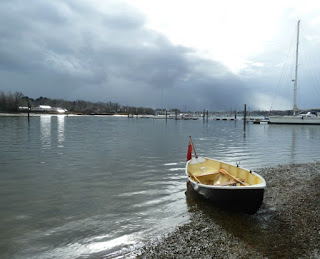 By the time I got back to Swanwick Hard the rain had stopped, everything was very still and the sun was starting to come out again.
Posted by Bursledon Blogger at 06:30 4 comments:

The Lymington seawater baths were looking empty, cold and uninviting, the daytime temperature was below 5 degrees C which is probably warm for many, but in this mild part of the country is pretty chilly, with just a couple of palm trees as a reminder of warmer days to come. 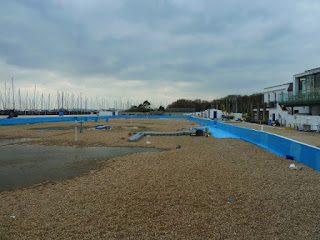 In the next month or so there will be a flurry of activity and maintenance to get ready fro the easter opening. 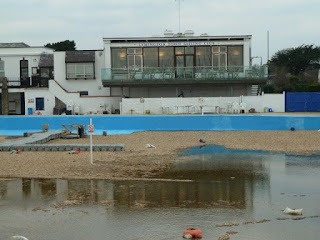 On an overcast day in February though, the bar at the Lymington Town SC looks a lot more invititing
Posted by Bursledon Blogger at 04:00 No comments:

For my overseas reader I'd better explain, when I was very young I had an old Uncle who lived in Huddersfield all his life, working in the mills. His Yorkshire accent and slang was so strong,  I couldn't understand half of what he was saying.

Reet' Parkey was pretty easy - very cold, which pretty well sums up Saturday morning out on the Lymington river where a few RS Teras were out practicing. 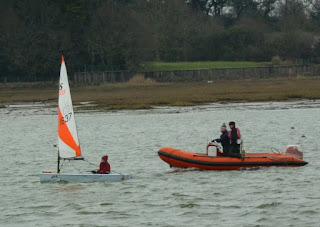