The convenience of an inflatable dinghy as a yacht tender is well understood, with the ability to roll it away to be stowed safely below on passage. But as anyone who has used an inflatable will know they generally are about the worst craft to row. 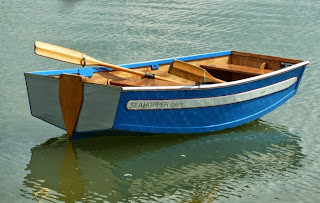 While the inflatable is ubiquitous there is an alternative, for the past 28 years a small boat yard down in Somerset has been building  the Seahopper folding dinghy. It's a proper rigid dinghy that can be sailed and rowed, yet folds flat for storage and transportation.

A work colleague was in Winchester recently, so I took the opportunity to take him for dinner at the Jolly Sailor. As we drove through Old Bursledon he commented "Bursledon has a High Street?". 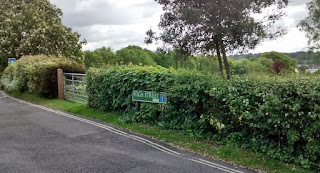 Indeed it does, there's even a letter box and a phone booth. 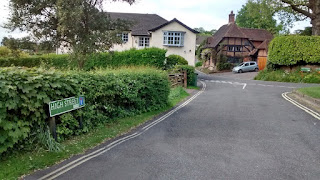 While Joseph was at a party at the Fareham leisure center recently we took the opportunity to explore a part of the Portsmouth harbour shore that I've never visited.

There's a path which follows the creek around from Fareham to nearby Wicor. 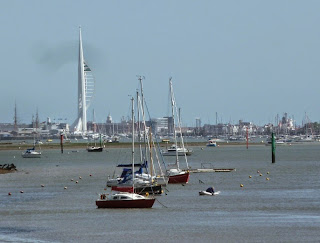 There were some splendid low water views across Pewit island,  Spide Lake and  Bombketch Lake. No idea why it was names but we had a mooring at the entrance to Bombketch years ago it was a lovely, peaceful place to stay aboard on a summer evening. In the distance Portsmouth docks, the city and the Spinnaker Tower. 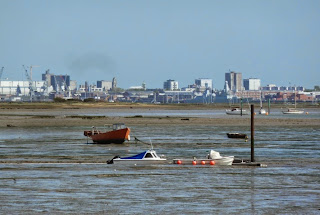 The train waiting at platform 5 has just been eaten....

Commuters to Waterloo found a new distraction last week, instead of (or perhaps in addition too) late trains, crowds and queues  trying to get to the tube, the latest station centrepiece is a trio of roaring dinosaurs promoting the new Jurassic World movie. 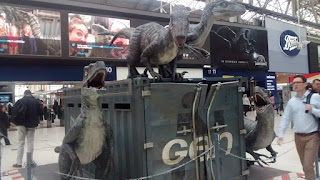 Either that or it could be South West Trains latest idea for ticket collectors.
Posted by Bursledon Blogger at 08:22 2 comments:

All that's left of the public hard at Hamble which 100 years ago stretched pretty much all along the foreshore. 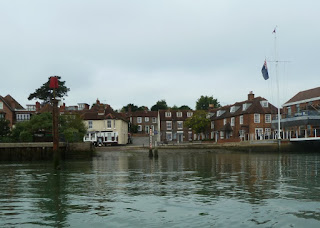 The main street in Hamble runs right down to the slipway which is wide and easy to launch from.

Parking is a problem, the adjacent car park is aggressively patrolled by the local Eastleigh council enforcement officers (I'm sure they are doing a vital job) so make sure your ticket is up to date and correctly stuck on the windscreen
Posted by Bursledon Blogger at 19:51 1 comment:

I'm a regular reader of Moth enthusiast sailors Earwigoagin and Mid Atlantic Musings so when I spotted these boats with their matching, multi coloured sails, sailing on the pond at Salterns SC near Lymington,  I guessed they were moths and wanted to know more. 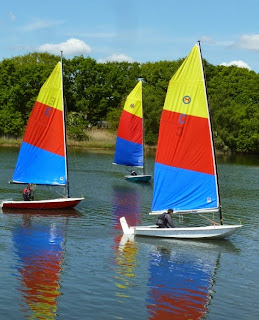 The club is pretty unique, solely focusing on teaching kids to sail. They have a fleet of the usual Optimists and some Solent SCOWs another local boat, and apparently a fleet of Moths. Some research on the British Moth web site shows they are built locally by john Clardige and look to be the most southerly fleet in the UK. The hull form has a very distinctive scow shaped bow and hard chines. Interesting history here.
Posted by Bursledon Blogger at 06:30 1 comment:

This clinker built, center board dinghy "Best Friend" was pulled up on a drying mooring above Dell Quay. The builders plate indicates she was built by Tucker Brown Burnham on Crouch, so definitely not a local boat. 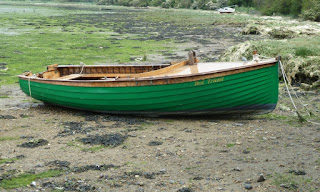 While perhaps not a native of the Solent waters, the hull looks powerful and has good free board which indicates a sea worthy boat. 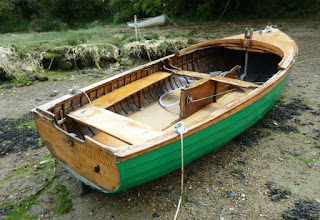 Details of what looks to be a steel centerboard and the traditional drum winch lifting mechanism. The centerboard case and side frames are very nicely shaped, speaks of fine build quality. 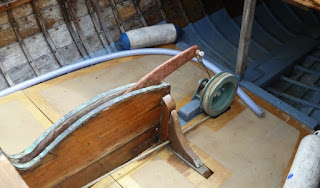 Let's hope she is being used as being left uncovered all that varnish work will quickly deteriorate.

A nice boat for exploring and pottering around Chichester harbour.
Posted by Bursledon Blogger at 06:00 2 comments:

How cool would it be to have your own slipway like this waterside house in Emsworth. 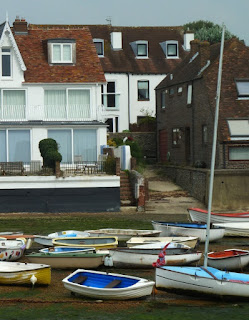 For those who only wish to visit launching is from the nearby public hard which has good access with parking nearby. 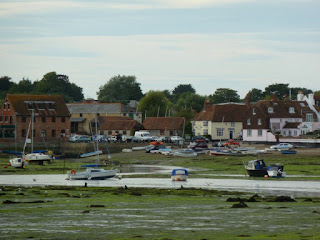 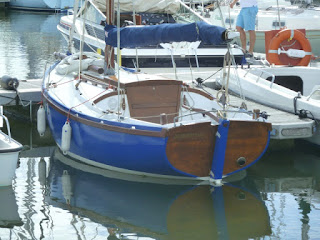 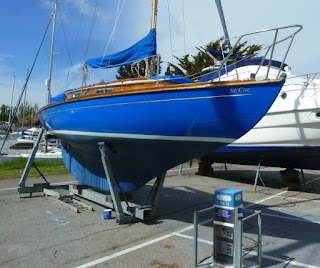 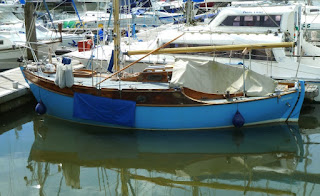 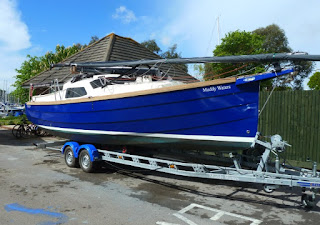 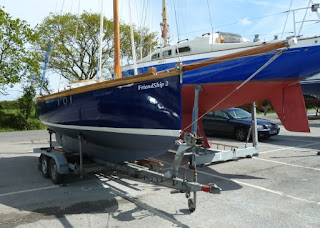 Interestingly the boat in the background is also blue, maybe more of that subliminal influence?
Posted by Bursledon Blogger at 06:00 1 comment:

Hill Head Sailing Club have a nice, though private slipway over on the Meon shore which lets members of the club launch into the protected water inside the harbour. 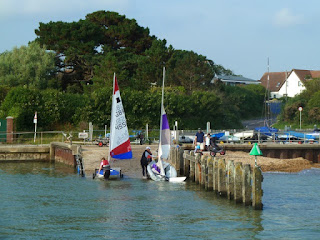 The club's catamaran sailors don't have things quite as good, boats are stored on the spit which creates the little harbor and is a little exposed, probably a good idea to take the boat home during winter. Launching is across the shingle beach, where some heavy duty fabric tracks have been laid down to make things easier. 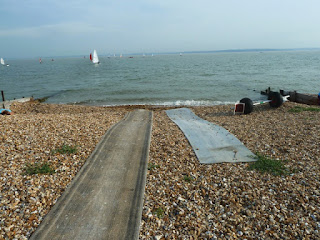 Not a good way to park a tender. 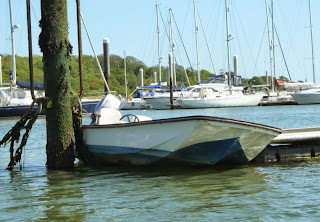 Then again it would be hard for someone to steal, so maybe it's a good low water spring, security move.
Posted by Bursledon Blogger at 06:30 No comments:

Hamble River Sailing Club held their annual camp away sailing weekend at Fairthorne Manor on the banks of the upper Hamble where the creek leads up to Botley. 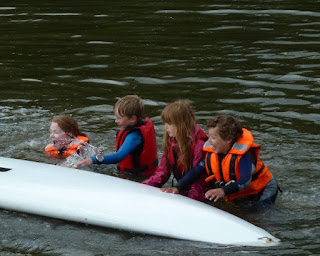 There were a load of boats ranging from Optimists, Picos, kayaks, paddle boards but the best time seemed to be had just getting wet and having fun. 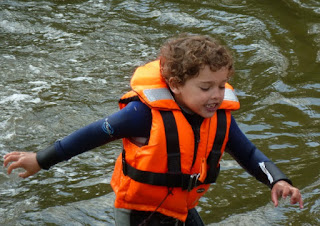 With low water in the afternoon everyone set off to explore the creek in search of pirate treasure, the creek winds through wooded shores up to the old mill at Botley. Where it was shallow everyone walked, with the canoes and paddle boards on hand where the water got deep (and very muddy at times). 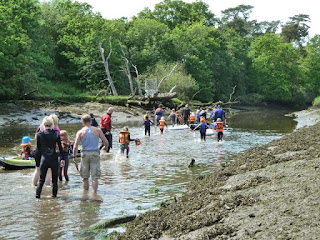 The weary pirates returned after about an hour and a half of fun and adventure. The old pirate map had proved it's worth, having revealed not one but four stashes of pirate booty which included sweets, pieces of eight, jewels and a compass for everyone. 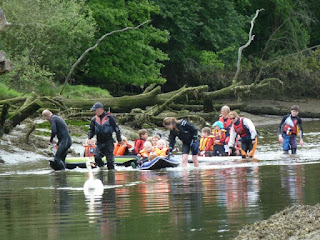