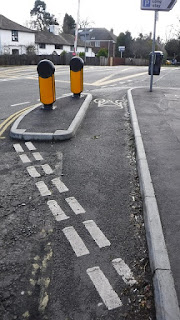 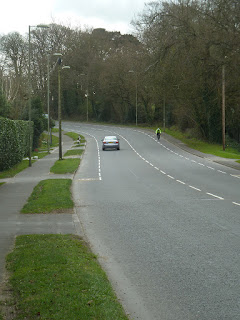 We really need to do much, much better.
Posted by Bursledon Blogger at 06:30 3 comments:

Dilbar at 157 meters is apparently the biggest super yacht by volume, estimated to have cost around  US$ 600 million, she can probably accommodate 40 guests and a crew of 80. - details not publicly shared by Alisher Usmanov who is believed to be her owner. 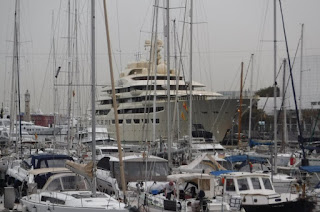 While Dilbar towers around the more regular leisure craft, the super yacht scene is nothing if not about ego. In stunning blue and white, neighbouring Madam Gu perhaps trying to demonstrate that size isn't everything when it comes to sheer style. 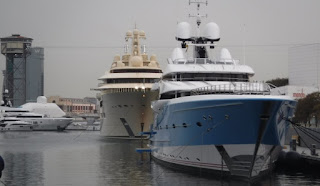 Or perhaps not, something which may or may not bring a smile to the face of her owner or designer, Joseph remarked that it looked like the cartoon boat from the Cars 2 movie. 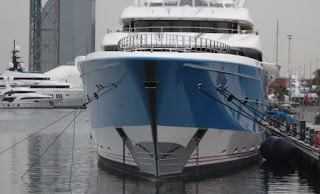 It's probably because we're relaxed and have more time but I seem to notice interesting motorbikes when we're on holiday. 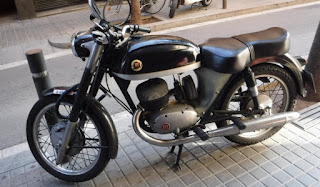 This Montesa was parked near our apartment in Barcelona. Montesa is better known for off road trail bikes, but this is a commuter bike which I think was called the Impala made in the 1960's amd 70's.

While I was taking the picture a man came up to me and explaied it belongs to his brother who runs the local bakery, deli where we had breakfast most days, sadly he wasn't there when we visited to find out more details. 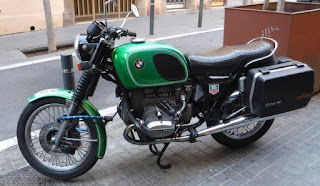 A BMW R60 in great condition, if I see one of these in the right condition and the right price I'm going to buy it - probably my third or forth mid life crisis. 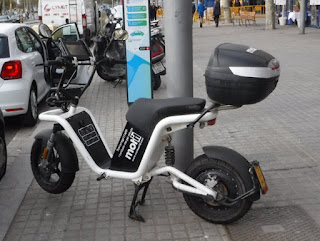 There  were a lot of these electric mopeds running around, including one which nearly ran me over (can't hear them coming - must look around more). If we had better weather, think less rain I'd be more than happy popping down the shops on one. 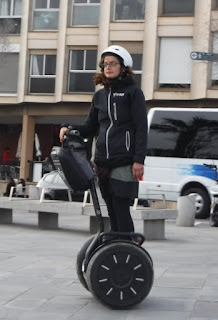 Not sure I'm that keen on these, fantastic technology and all that, there were a lot on hire zooming up and down the seafront.
Posted by Bursledon Blogger at 06:30 8 comments:

Curious name for a white yacht? 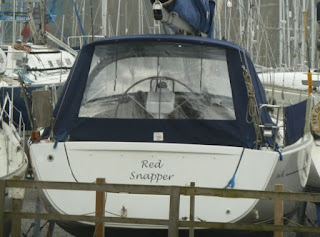 My recent post about my friend's motorboat prompted quite a few comments and while I confess that motorboats aren't really my thing and I've been annoyed by excess wash on more than a few occasions, I'm maybe more tolerant than fellow blogger and film maker Dylan Winter, so how about some of these for excess down in Port Vell Barcelona 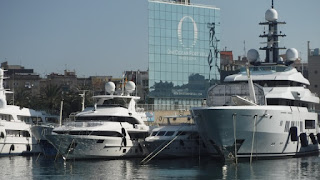 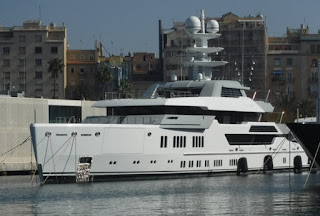 Like them or not, there are more than a few of these monster boats lining the quay of what was once the old commercial dock. 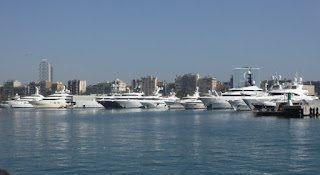 Dilbar - the big daddy of them all was clearly too long for a stern to berth, either that or the lorry's wouldn't have been able to deliver. 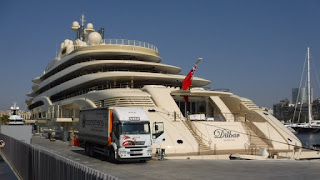 Thankfully among all the excess there is still room for more modest boating. 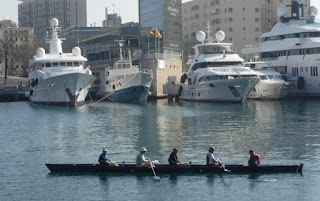 And not too far away from the super yachts were a few of my kind of boats. 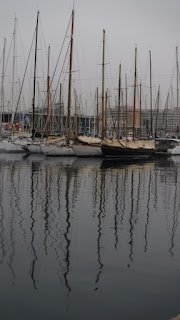 I can just about remember hiding behind the sofa when Dr Who first came on the telly back in the early 1960's. It's amazing that given the tiny black and white telly we had in those days that it was so scary - although there was a great episode I seem to remember when the Doctor ran some Daleks over with a dustbin lorry and we all cheered. 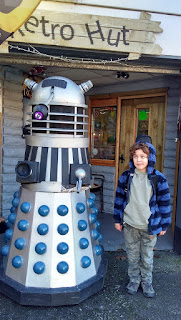 Fast forward more than a few years the Daleks are still around but the new generation are not finding them quite so intimidating.
Posted by Bursledon Blogger at 06:30 3 comments:

The perceptive and those who know their geography will already be aware that Brockenhurst is a delightful village in middle of the New Forest about six or seven miles from the sea.

What with Storm Doris and the general heavy rain we've had of late the top of the Lymington river was in full flood. 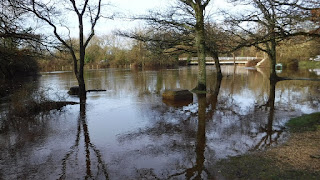 There was quite a current running under the road bridge which spilled out across banks.

I was thinking hopefully the owner of this property doesn't need anything from his greenhouse, but maybe it's the latest thing in hydroponics.
Posted by Bursledon Blogger at 06:30 2 comments:

Churros are something of a Spanish signature breakfast dish for holidays and lazy weekends. A little like crispy doughnut sticks served with a very thick melted chocolate and milk drink, more typically from Madrid, but downtown in the old gothic quarter of Barcelona there are more than a few cafes which serve good churros.


Who knows maybe Joseph will get his own foodie channel on youtube,

While on our gastronomic tour of Barcelona we also found these in a local bakery and absolutely had to try them, apparently originating from the Valencian town of Alboraya, they were delicious. 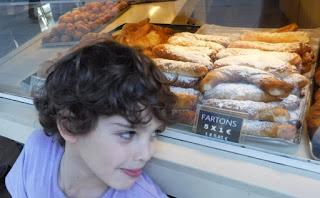 What I like about Europe is that it isn't all that big but it's very diverse, so less than 2 hours flying time away we enjoyed warm spring sunshine while Storm Doris raged at home. 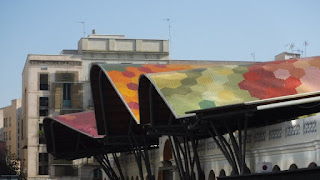 Probably all too familiar the modern and colourful Santa Caterina market  above, while the view from the redeveloped bull ring has more traditional views across Placa Espanya and Montjuic below. 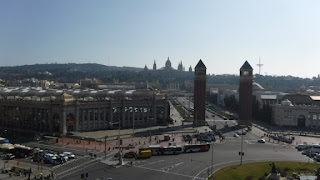 Over the years I've spent a lot of time in Barcelona both working and on leisure, the city never fails to fascinate, as an example how many major cathedrals have ducks and geese wandering around in the cloisters? 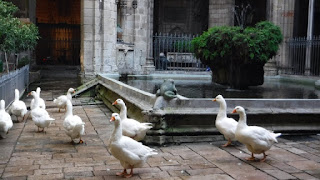 Of course the attraction might be the waterfront area of Port Vell just at the end of the Ramblas. 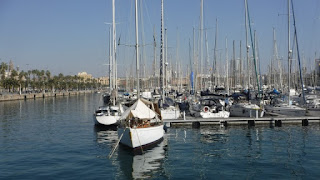 Barceloneta was once a poor and slightly run down area where fishermen lived until the Olympics started redevelopment, you'd need to catch a lot f fish to live there now. 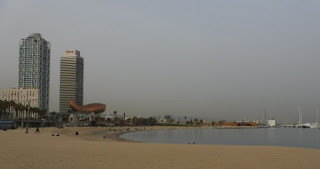 Quite apart from being a great place to visit, the people are so friendly, I lost count of the number of people who stopped to give us directions or advice or just talk. 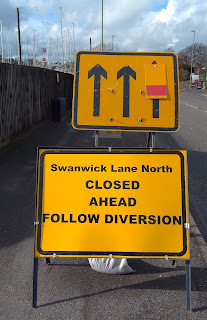 Which is great except that last time I looked Swanwick lane runs West to East - confused?

Maybe it's an early April fool?