Friend and local boat builder Greg has an interesting project in build down at the Elephant Yard, converting a 1970's Itchen Ferry into a modern, gaff rigged cruising boat.

It's interesting to see what type a boat a professional boat builder makes for himself and knowing Greg who used to build the cunningly fast Memory, I have no doubt that his new boat will have  good turn of speed. 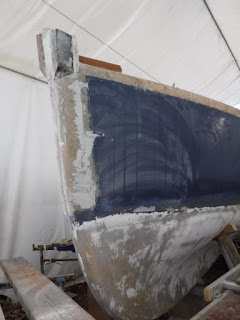 Back in the 1970's a local company Drummond Bayne Marine built a GRP cruising boat based on an old Itchen Ferry hull, I'm guessing they took a mould off an original boat, the Itchen Ferry being a famous Solent fishing boat type, but added a "modern" cabin and Bermudian rig.

Greg found a cheap example (not the one pictured below I hasten to add) and did some major surgery, which includes cutting off everything above decks, stripping out the hull and a complete remodeling of the stem, pulling in the forward sections. 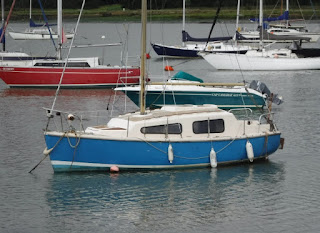 The hull mouldings were in great shape, now substantially reinforced. Below Greg giving me the tour of the deck frames, beam shelf and carlins, which are built in straight grained Douglas Fir, lovely stuff. 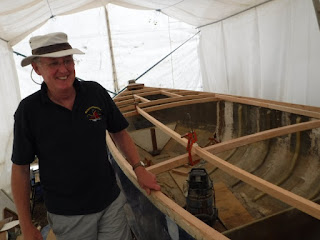 Greg plans a traditional wooden cabin, she should be launched and ready to go for next season.
Posted by Bursledon Blogger at 07:05