With a fine weekend in prospect we drove down to Dorset to make the most of the weather before the Indian summer turns to autumn and then winter.

Studland Bay is bordered by a sandy beach running all the way from the Poole Harbour entrance almost right down to Swanage. It's sheltered from pretty much any weather except an easterly wind and relatively shallow so a good spot for us all to get out on the kayaks. 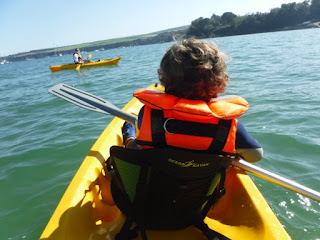 We launched at Knoll beach, a national trust area which is one of the best places to launch, just a few yards from car to sea. Our destination was Old Harry, three chalk formations which lie off Handfast point. 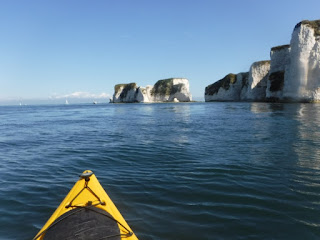 Joseph was getting a little bored so he and Erica found a quiet part of the beach right in the corner of the bay, while I headed out to the rocks. 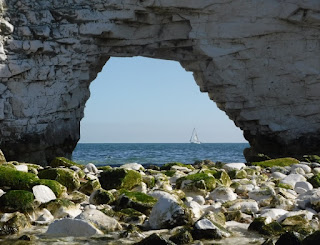 And as if by design a yacht came sailing past just as I was looking through the chalk archway.

On the way home we stopped off at a viewing point, Hartland Moor to the  left, Poole and Brownsea to the right, the pictures don't do it justice.
Posted by Bursledon Blogger at 06:00