A few local classics at the Elephant Boatyard, the dark water reflecting the high trees does seem to set them off very well. 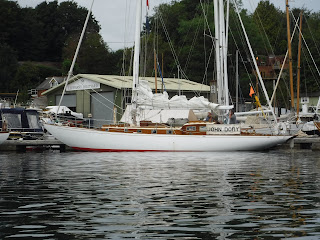 Above just about my perfect boat, powerful, lovely sheer, stepped coach roof. Below although not especially a fan of canoe stern, Saluki is really lovely. 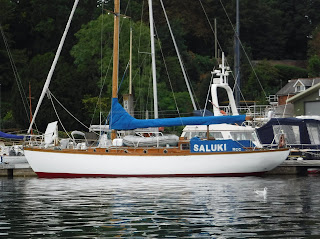 Much as I actually enjoy varnishing, I prefer to see this much on someone else's boat. 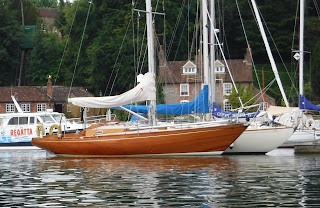 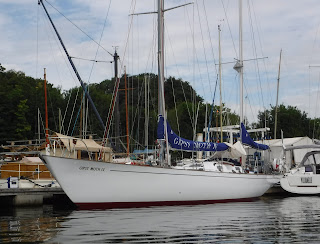 What better spot to chill in the early evening after a day on the water. 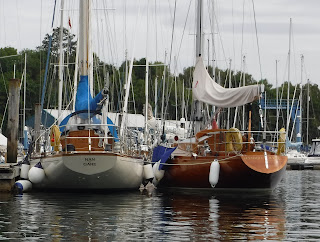 From a distance I thought this was slab sides Phil Bolger type boat only to realise that it had full topside protection deployed. 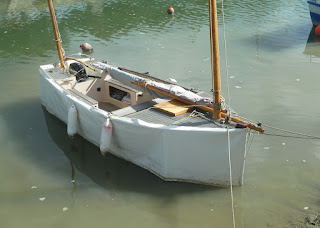 Walking past, it's actually quite a pretty boat, presumably the maroon topsides are subject to fading with the strong sunlight. The starboard side was facing south west and port north east so guessing the reason for the asymmetric cover. 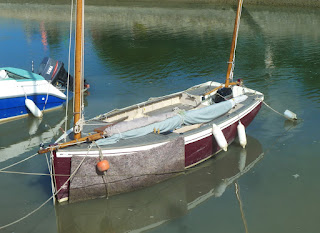 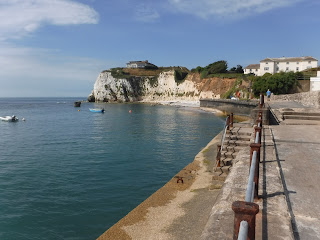 Open to the south west it can probably be a wild and windy spot during winter gales, but this settled morning it was perfect, calm and the water crystal clear. 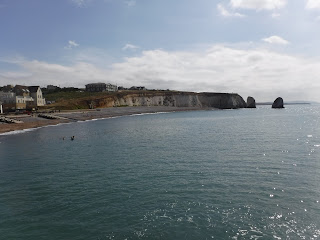 Later taking the coast road south above Blackgang Chine, the view back to Freshwater and the cliffs of Tennyson Down. 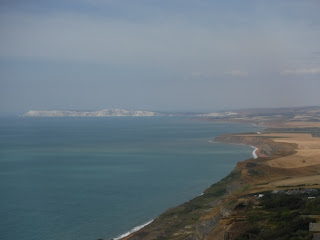 Not exactly what one would expect to see on an island on the west coast of France, this little boat has the distinct look of a Cobble from NE England 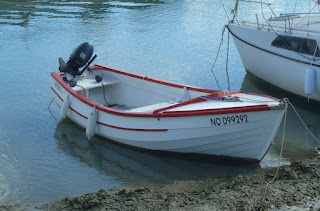 Be interested to know if it was an imported boat or if the characteristic tumble home to the rear topsides and the cod's head widest beam forward are local features. 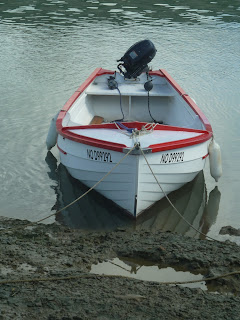 Given that Cobbles evolved for beach launching through surf out into the the rough waters of the North Sea, the type is probably very suitable for the waters around Noirmoutier.

Noirmoutier is an interesting place, it's a narrow, low lying spit probably no wider than 1Km which sticks out some 8Km into the Atlantic

Above view to the west from La Guérinière  looking out into the Atlantic. Below on the eastern side looking into the bay of the Cote de Jade and mainland France.

Access to the island is across a new bridge or you can brave the causeway when the tide is out as below, not a place you'd want to break down. 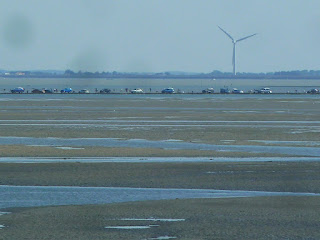 There are three large villages and miles of beaches which were almost deserted when we were ther in late August. 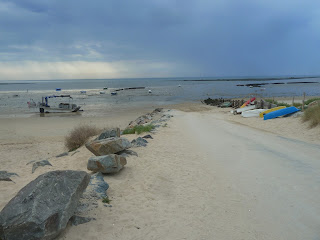 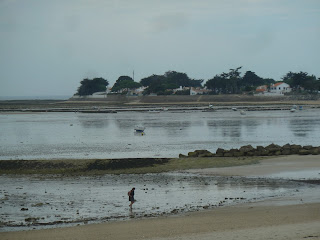 Fantastic place on the settled days we were there, probably very different with a winter gale blowing off the Atlantic, but no less spectacular. 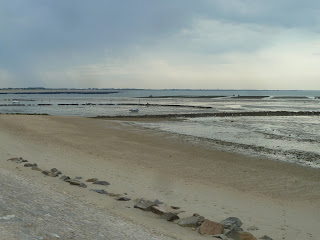 Noirmoutier was a great discovery for us, we'll be back.

Pause for a couple of minutes to Remember

With the passing of Queen Elizabeth we've lost a significant connection to those who lived and served through WWII, those who could provide a real memory of the events, the bravery and sacrifices. My mum was born in the same year as the Queen and also served in the military as a WAF ( the Women's Air Force),  sadly while she didn't live into her 70's she carried the experiences and memories of the war throughout her life.

We were fortunate to be in France recently, on the Normandy beaches where the memory is still strong. 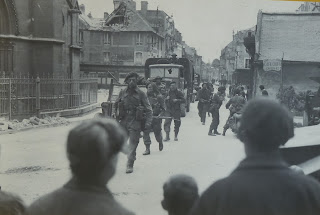 Above the photo of main street in Douvres la Delivrand, a few miles from the coast showing the allied troops as they liberated the town on 8th June shortly after D-Day, although the nearby Germany installed radar bunker took some 12 days of fierce fighting before it was surrendered.

Below the street today, with most of the bombed and damaged buildings in the main street now restored. 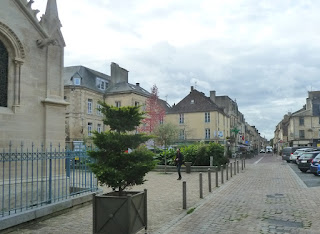 On Sword Beach, the most easterly of the allied landings,  the two houses adjacent to this slipway are also featured and named in the commemorative information sign below. 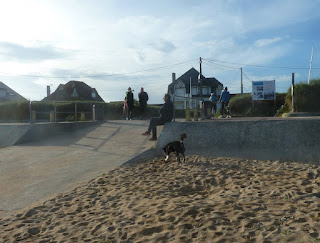 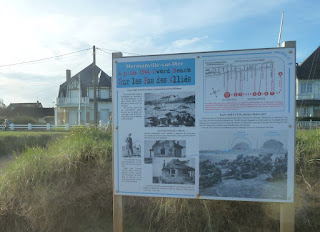 In Luc Sur Mer the allied invasion of 1944 is commemorated together with a lesser known  1941 reconnaissance mission  by men of No 1 Commando B Troop. A navigation problem landed then not at Courseulles-sur Mer but a few meters away from the German command post at the Hotel Beau Rivage ion the Luc seafront. 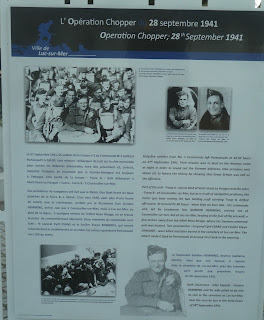 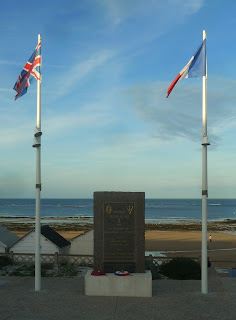 On our way into Ouistreham the road was closed for a group who we learned from a policeman, had gathered to celebrate a 100 year old local veteran. A large crown had gathered including the mayor and local dignitaries in his honour.

The living memory of WWII is slipping away as the few reaming veterans are now in their late 90's or over 100 years old,  it's important that we who have benefited so much from their bravery and sacrifice, carry on the memory of their stories, their deeds and their lives.

To all our service personnel past and present we remember and honour you this day.

We stopped off for a picnic in a little inlet on what is the largest lake in France, located in the Loire Atlantic, near St Philbert-de-Grand-lieu. 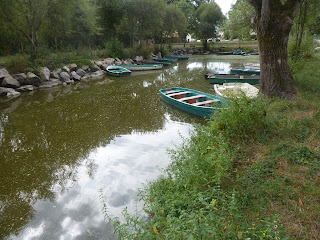 Traditional boats are flat bottom and very shallow draft, presumably given the very thin water around the edges of the lake which was an important fishery., the one on the right doesn't seem to be in such good condition. 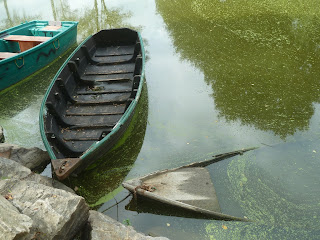 Plastic and aluminum low maintenance boats now starting to crowd out the traditional wooden ones. 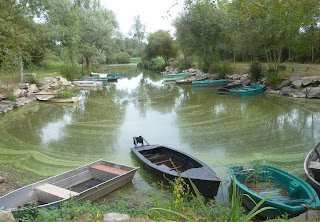