It's curious to understand why people like to dress up when they go boating. 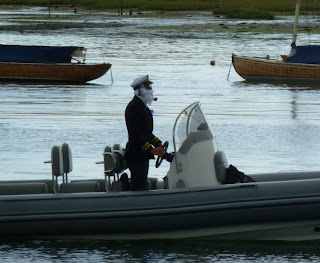 So much for the captain, the crew look like they're set up for mixed weather. 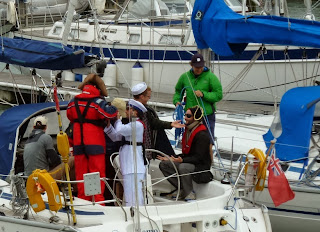 What can you say, hi tech indulgence 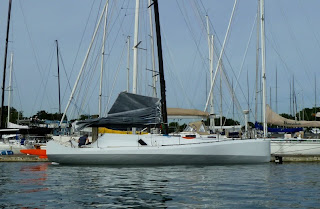 It's anything but retro, then again looks like the designer has taken inspiration and dusted off those 1950's tail fins to great effect. 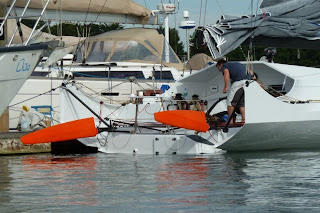 Looks even better in motion, a study in stealth? 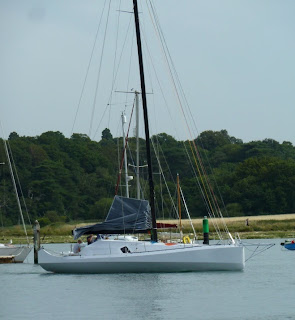 It's that time of year, the nights are drawing in and dawn breaks on a misty and still Sunday morning a week ago. 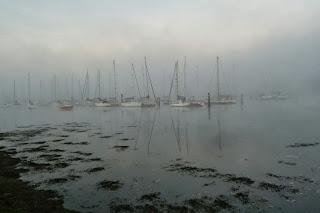 Running along the river at about 6.30 everything was wonderfully still, the water was like glass and the mist was still rising as the day started to warm up. 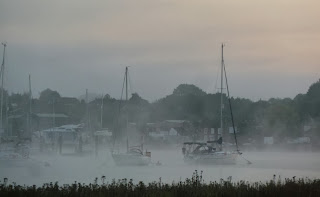 Half an hour later the mist had cleared, the sky was blue and it was a glorious morning, sadly not set to last as rain was forecast by late morning. 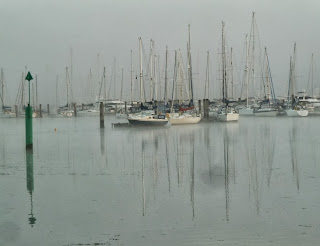 After my run I pulled the boat out of the garage and we all rowed back down the river for breakfast at the quay in Hamble, getting home just as the first drops of rain started to fall.

That's a 3 mile run, followed by a 6 mile row, I then went on to lay 25 sq meters of wooden flooring in the new extension. Bursledon Blog version of an iron man event, I could hardly move by evening.
Posted by Bursledon Blogger at 03:00 2 comments:

We drove over to Emsworth for a late afternoon walk, but by the time we got there Joseph, who had clearly had a busy day was soundly asleep. We left him snoozing in the car and sat nearby to admire the views. 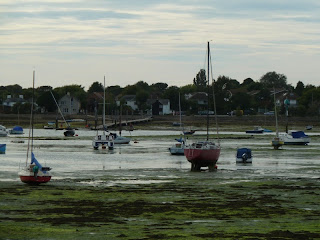 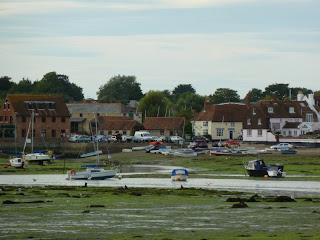 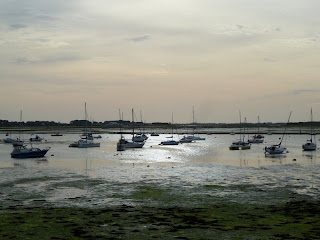 I was fascinated by this fresh water pond in Vic le Comte, it was built in a water meadow at the bottom of the village, I'm guessing the purpose was to keep fish. Several small streams had been very deliberately funnelled together in these stone channels to provide the water source. 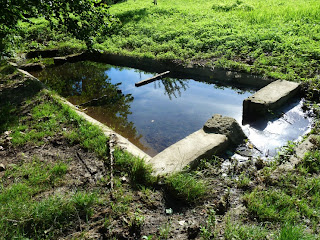 The flow rate is was quite slow, but enough to keep the water in the pond fresh and clear with absolutely no sign of stagnation even though the pond was clearly unused. 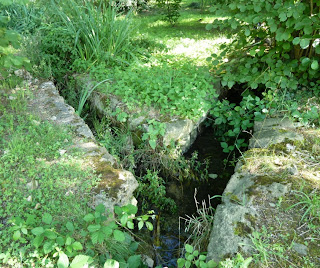 With apologies to the late Charles Stock and the current owner Creeksailor, apparently at this time of year bass can shoal in the river. Certainly this group of seagulls had spotted something interesting and that normally means edible. 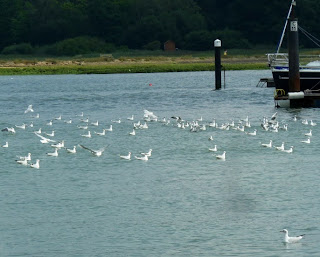 They weren't going to be disturbed or diverted by passing boaters either. 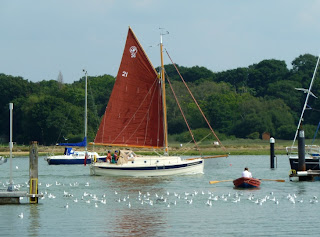 I Googled the correct collective noun for a group of seagulls which returned not surprisingly a flock. Also suggested was a squall, a squabble, a rancour and my favourite a sh*t squirt of seagulls.
Posted by Bursledon Blogger at 07:06 1 comment:

I have a pet theory, which is that if you have to live inland, away from the sea, the only place a sailor can feel comfortable is in the mountains. And so it was that Erica persuaded me for the first time in memory to take a holiday away from the coast. 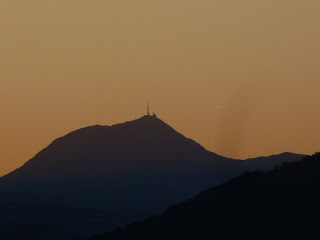 We have driven through the region many times on our way south and have always admired the scenery but that apart, the area of France called the Auvergne was completely unknown to us and what a surprise. Part of the massif central, the central plateau in France which rises to around 600 meters, the area is part of the “Chaine de Puy’s”, around 100 or so volcanic peaks, long extinct which pepper the region and rise in some cases to 1500 meters, like the most famous Puy de Dome from where this shot was taken. 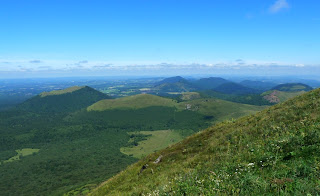 We stayed in a small town called Vic Le Comte and like so many towns and villages in the region it is characterised by stones walls, fortifications and tiny back streets harking back to medieval times. Indeed it seemed at times that almost every peak had some castle or fortified structure at the top, we didn't have much opportunity to look into the history, but you have to think it must have been a rough old place back then. 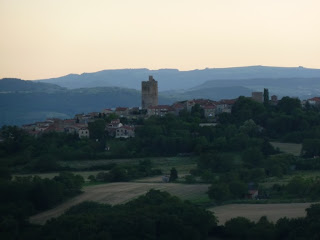 One thing which was really apparent, the almost total absence of Brits, given that the Dordogne (AKA Rural Chiswick) starts just at the other end of the chain it was a very pleasant surprise and a great opportunity to practice our French.
Posted by Bursledon Blogger at 06:43 4 comments:

Friend and local boat builder Greg sent me a text about my posts on Primrose “ looks like an identical boat to shamrock, built either by Dyers or the Phoenix Boat Company(who were opposite Dyers yard)” Apparently Greg owned Shamrock which seems to be a sister boat that had spent most of its life at Newman's yard in Wimbourne in Dorset.

Greg donated the remains to the town museum, where it used to hang in the tea room, although he doesn't reveal why she wasn't salvageable. Sounds like a winter day out in Dorset might be in prospect to see if she's still there. 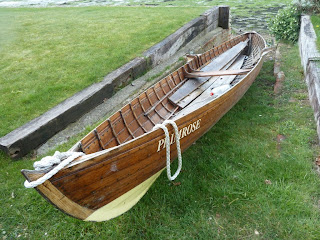 He also mentions that St Denny’s Rowing Club (see fellow blogger Graham's  Port’na’storm for more details) had or have a couple of similar boats.

Greg pointed out the grown, timber riggers and the distinctive Southampton row locks.
Posted by Bursledon Blogger at 06:13 4 comments:

On holiday I noticed that the entertainment system had the complete Star Wars collection, we thought it might be something Joseph would like to watch. A couple of months later we have a Darth Vader outfit, two light sabres around the house and almost every conversation starts with "when I'm a Jedi".

It seems that we're not the only people with an imaginative and slightly obsessive four year old.


It hardly seems like 36 years since we were enthralled by the original Star Wars, it was a great summer in 1977, the Queen's Silver Jubilee, the Sex pistols played God Save the Queen. We queued for the late night showing at Leicseter Square, it was amazing until the end. As Luke and Han go up to receive their medals a voice from the back shouted "I'll bet Jim fixed it for them".