As we usher in 2022 lets do so with a spirit of positivity and confidence.

COP26 may have been FLOP26, the remaining glaciers might not have enough ice left for a decent gin and tonic, the rising seawater might be lapping around our ankles but mankind is always defined by our hopes and aspirations. 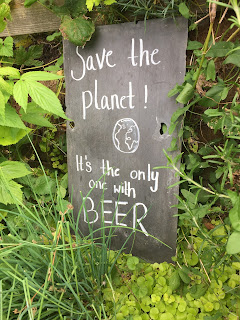 Lets close out the year with one of my favorite boats.

Actually it was a Saturday morning in a leafy side street in Lymington, which was a great opportunity to take a look at those lovely lines. 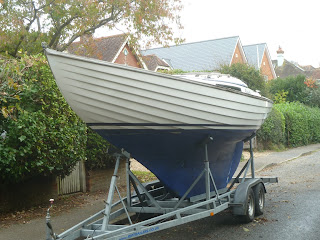 This is a GRP (fiberglass) version of what I believe is the Nordic Folk Boat, the moulded chine lines really show off the shape.

I'm reminded of the late Phil Bolger's essay  "Afloat on a sea of peas" although the form is very different to many of his innovative box designs. 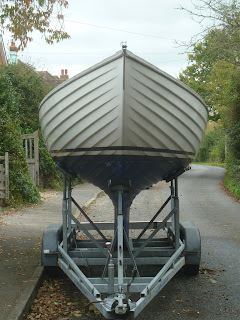 You can almost hear the water lapping and trickling on those plank lines. 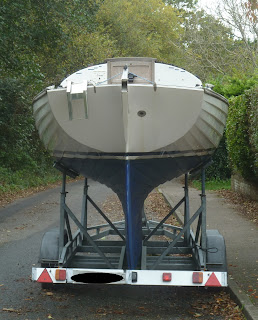 All the best for the new year, if you haven't made a resolution then at least try and get afloat more often in 2022, be kind to everyone even those who don't deserve it and remember you can't change the past so work on changing the future.

Apart from a couple of chilly days it's been a mild autumn and winter so far, but that hasn't stopped winter visitors to the river including the usual Canada and Brent geese. 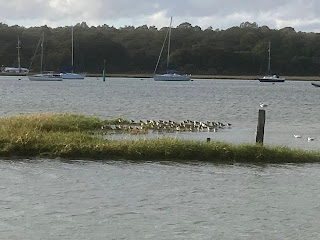 I'm not sure what these small birds are, they were flocking around the old wrecked MFV but seem now to have moved on to pastures or rather mudflats anew.

With a slight break in the festive drizzle I took a walk along the river while Mrs BB was baking one of her scrumcious cakes for later.

Apart from other walkers there we a couple of runners and cyclists out, a paddle boarder and even a couple out on a kayak, all of which are not a bad way to spend Christmas morning. 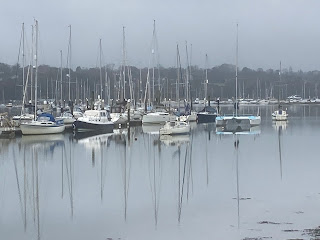 The river though was still and serene, if a little grey.

Whatever you are doing here's wishing you a merry Christmas from Bursledon.

I've been working my way through the beer advent calendar, which admittedly wasn't too difficult at the end of the working week and over the weekend. 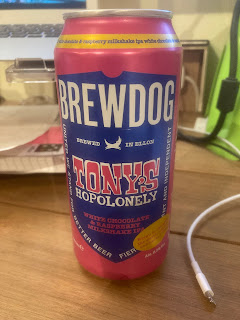 I wasn't quite sure what to make of this one. I've drunk Lef's Ruby (forest fruits) and the one with honey, but white chocolate and milkshake was a new one one.

But I have to report it was surprisingly good, not a session beer but good as an aperitif.

Meridien Modena is a bit of a tourist hot spot at the bottom of Lyndhurst high street looking at the array of exotic cars on display. We pass so often that we don't normally pay much notice, but this caught my attention on the way to our favorite cafe. 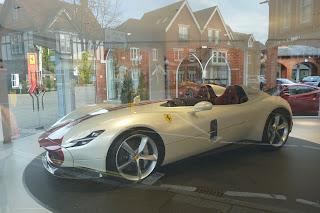 Not all of the premises are as luxurious as the showrooms, but these old photos are interesting especially the one of Peter Sellers with what is probably a 246 Dino and to my mind one of the nicest Ferrari ever. 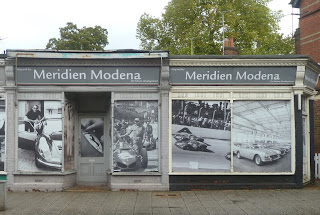 As usual they have quite a few to choose from, so if Santa is going to be generous this year it might be worth a visit. 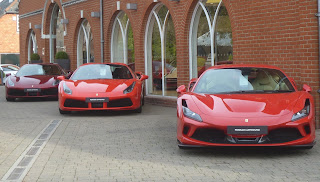 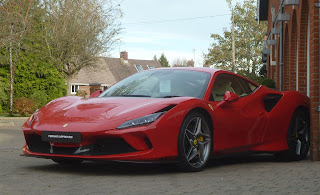 At the time of writing the open roadster was no longer on display, so maybe someone has already bought it.

C'est la vie and anyway how would I have fitted a roof rack for the kayak? 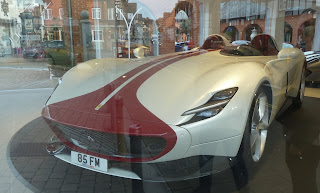 The two Wagtail dinghies purchased from the local Sea Scouts, safely ashore in Greg's shed for the winter. 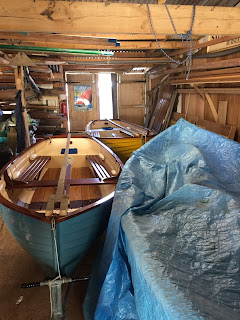 Lovely boats, I'm going to ask to go for a sail in one next season, watch this space.

The planets had all aligned on a December Saturday morning, brief high pressure promised clear blue sky, HW was a very respectable 10.15AM and the pile of lumber and building materials being stored in the garage for the garden room had just about cleared, so I could pull out Gato Negro without too much difficulty and go for the first row in months. 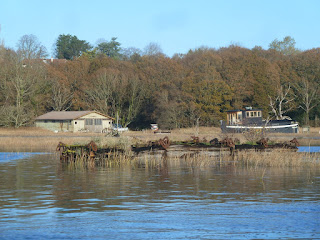 Arriving bang on a predicted 4.8m HW the saltings which cut off Badam Creek from the rest of the river so I was able to row straight across, in the distance is the shed formally used by Salterns Boatbuilders which according to Greg the water would come under the doors on such tides 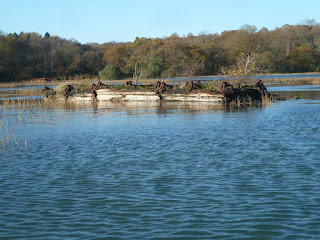 This is an old raft used by the navy working alongside warships for hull painting and maintenance, made up of massive oak timbers to prevent the work party getting squeezed between ship and the dock wall. You can gauge the size of those shackles.

For years it was stranded on the foreshore at Bursledon pool, but floated off during extreme HW in 2007 going down stream on the ebbing tide presumably without doing too much damage to moored boats and ending up at Badam, even this morning's tide wasn't enough to float it off. 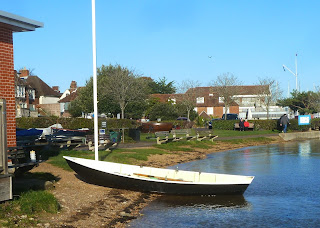 Gato pulled up at the cafe in Hamble, another foot or so of tide and I would have be able to row past the take away window.

As the days rush into winter, the leaves fall and reveal views that are disguised in summer's growth. 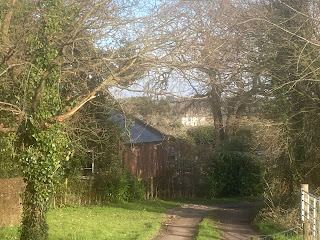 This picture taken in January allows a view from the church in Bursledon across the river to Sarisbury Green.

Inside the church was cold, still and sad with the pandemic restrictions in place. 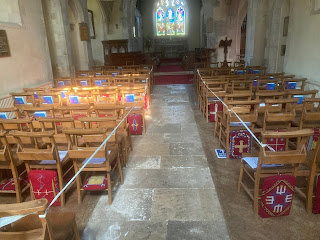 As the nights have been drawing in with the rapid equinoctial changes the evening twilight's have often been dramatic and full of foreboding. 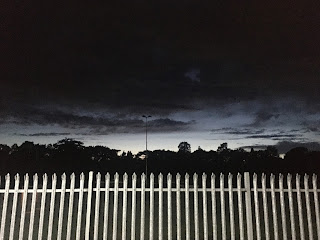 On the night we remember Guy Fawkes and the gunpowder plot over 400 years ago I'm reminded but can't remember who wrote "The Only Man Ever to Enter Parliament with Honest Intentions".

Update - I wrote this post back in November meaning to post on 5th, but the commentary on Guy Fawkes is still makes me smile

An early present from Mrs BB. Going to be a challenge but will try and keep up. 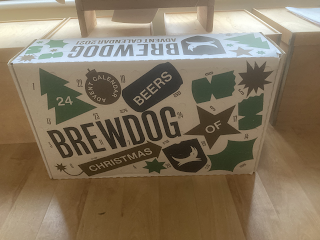