While wishing everyone best wishes for the new year, I'd like to mention a few of my fellow bloggers who have encouraged me during the last 10 months of writing the Bursledon Blog. 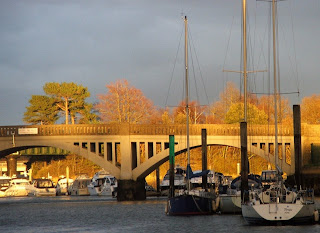 First up is Chris Partridge and his excellent Rowing for Pleasure blog. It was reading Chris's blog which got me started (he did a post on my rowing skiff Gato Negro back in April 2008). Chris is a professional journalist and although I don't claim any professional competence, I've tried to keep things upbeat, concise and easy to read.

Thomas Armstrong at 70.8% is a fellow blogger who shares an appreciation of nautical tradition, small boats, yacht designers, voyaging and pretty much all the things which interest me.

Earlier in the year Adam at Messing About in Boats promoted "Robin Knox Johnston" day for the blogging community. By complete coincidence RKJ's famous ketch Suhaili is ashore at a local boat yard.

From the Mediterranean I've been following Ben at The Invisible Workshop in Spain, while Laia, Mercè and David - Llauts emailed from Mallorca to say "we and other owners are working to give a future at our traditional boats and we have a great respect for the way you use the wodeen boats in the present. Now we are find people as you how is doing things that we want do here"

I confess to having a soft spot for Spain, I'm very fortunate to have travelled widely there on business, especially Bilbao and Barcelona, when I got to know and love the coast and the fantastic food, but most of all the people who are truely"simpatico". Erica and I have also sailed to Galicia and the "Costa del Morte" - that's "coast of death" - maybe if they had told us it was called that before hand, we probably wouldn't have gone there. Check out Una mirada a la Ría de Vigo to see how spectacular the Rias are.

I wish I had Tillerman's competitive streak, but then again I don't sail a laser (well not anymore), mind you I'd like to have him aboard for next years Old Gaffer's Race.

It turns out that I had actually met Bill of Bill's Log back in 1997 in La Coruna (I've used the Spanish spelling). Although I haven't met Ed Hughes I pass his Silhouette called Misty on my way to our yawl Greta now she's laid up in the yard (or on my way to the Jolly Sailor).

Places I mean to visit and will try harder in 2010. The the Dorset coast, there are some great pictures of this spectacular coastline on Mark Rainsley's South West Sea Kayaking. A very good friend has sadly retired from sailing on the east coast, so I need to find another excuse to visit those creeks and rivers, in the meantime I'm following Creeksailor and his adventures in the Blackwater estuary (his blog also has one of my favorite header pictures).

Further a field in the Pacific Northwest Michael AKA Doryman keeps us appraised of the traditional boat movement and his enviable collection of boats, while Erica is a regular visitor to "Dorywoman's" associated knitting blog Mary's Fibre Adventures. Across the east side of the US continent Christina on Bowsprite publishes some great pictures of the New York waterfront scene.

I've been following Dylan Winter and his circumnavigation of the UK Keep Turning Left on YouTube, back in the summer I spotted a really interesting boat Black Diamond in Dylan's episode in West Mersea. A whole trail of email's finally put me in touch with the owner Greg, one of the people who kindly passed on my questions was Juliette who has just restarted her Musings from a muddy Island from West Mersea in the last week or so - welcome back. 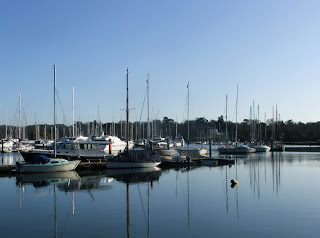 Apologies to the people I haven't mentioned specifically, I clearly spend far too much time on the Internet, but let me wish you all the best for 2010.