Mike took up ocean racing in the 1950's, but is perhaps best known for his trans-Atlantic racing in Blondie Hasler's famous converted Folkboat - Jester. He purchased Jester in 1964 following the OSTAR race of that year and competed in every subsequent OSTAR until 1988, when Jester was lost some 500 miles off of Nova Scotia. 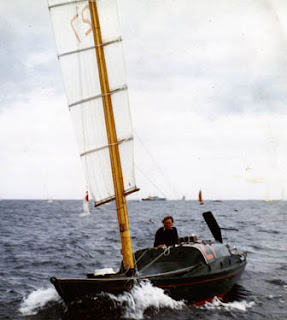 A trust was formed and a new Jester replica was built in time to compete in the next OSTAR in 1992. A "Jester" therefore competed in every OSTAR until 2000, in the latter years although below the minimum 30 feet length requirement, she entered by special invitation.

I never met Mike, but we did get a friendly wave from him aboard Jester a few years ago, when we were both struggling with very light winds coming out of Cawsand Bay on our way to Falmouth Classics one summer.

Through his writing in the yachting press, Mike could come across as opinionated, but it was based on his own unique experience. I recall when GPS was relatively new, the traditionalists were arguing that yachts should always carry a sextant and charts. Mike took the view that a hand held GPS cost half as much as a good sextant (so you could afford a spare) and a set of AA batteries would get him across the Atlantic.
Posted by Bursledon Blogger at 08:35