Our friend Glenn had recently bought a Laser 13 and asked us along for his first sail, not that he really needed any help, just with a new and unfamiliar boat it's useful to have a couple of extra hands along. 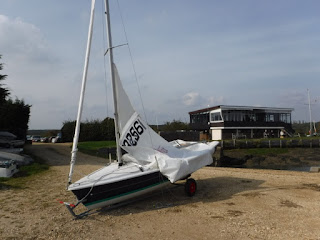 I've sailed the larger Laser 16 so it was a great chance to try out the smaller boat which is probably more suited to single handed or two up sailing. 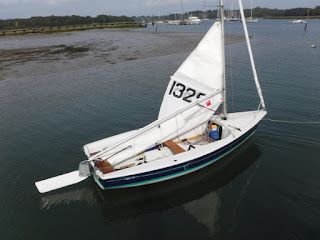 At risk of sounding like a yachting journalist, I have to say it's a well designed and well though out boat, everything is to hand and simple to use. We had the boat rigged and on the water in no time, it's light weight makes handling ashore easy.

It was a gusty day, but with a reef in the main and three of us (well two and a half as Joseph's still only 6) there were no dramatics as we sailed down the Beaulieu river.

Glenn sails from the Royal Southampton YC at Gins farm which is a lovely spot on an unspoiled Solent river as the panoramic shows.

We had a good sail, the laser proved to be an all around good boat, a safe and sporty family dinghy and is in fantastic condition.

The club bar had closed by the time we got back and put away so we retreated to the Master Builder's in Buckler' Hard which is just one of the hardships of sailing on the Beaulieu.
Posted by Bursledon Blogger at 06:30