Venus and Mars, and Jupiter too

I was at the station waiting for the horrible o'clock train up to London watching the dawn break in the eastern sky. It was incredibly clear with a bright light which clearly wasn't a star. 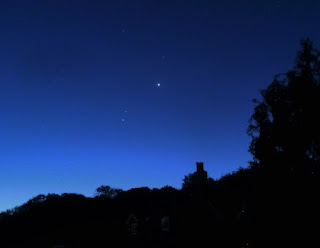 A quick google on the phone revealed as I suspected the bright object was Venus, but the big surprise was that the smaller objects were Jupiter, Mars and Regulus.

Saturn is also visible in the evening twilight and I was keen to show Joseph, but alas we have cloud cover.

The following morning I got up early to clear sky and managed to get the picture above. I think what it shows is Venus the bright one, Jupiter off to the left and lower in the sky, Mars just above, Regulus was visible to the naked eye but didn't come out in the photo.

According to the very helpful  earthsky web site they should be visible for most of October for all you early risers.