We dropped in to visit Wooden Boat Builder Marcus Lewis at his workshop in Fowey. Marcus was just finishing off a Plymouth Mayflower Dinghy which he will be showing at the Southampton Boat Show.

The Mayflower is a traditional 14 ft dinghy, I especially like the gunter rig which is easy to set and allows the spars and sails to be stowed within the boat. The Mayflower was a relatively local boat believed to be based on a rowing boat. Originally built by Skentlebery’s in Plymouth (see Classic Boat magazine in January 93 for more details). The first boat had a full skeg keel, presumably from it’s rowing boat heritage, which gave rather too much directional stability so the heel was cut away to improve manoeuvrability, a feature which has been retained on this latest example by Marcus. 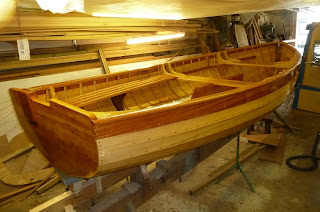 Marcus took the lines from an old local boat, seen here is his lofting and some of the moulds from which the new boat was built. 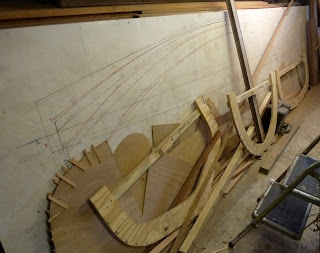 At 14ft the Mayflower seems like the perfect all round dinghy. You can imagine the lucky new owner having lots of fun days sailing a boat like this, more comfortable than a modern racing dinghy, picnics on the beach plus a spot of classic dinghy racing to fulfil those competitive urges. 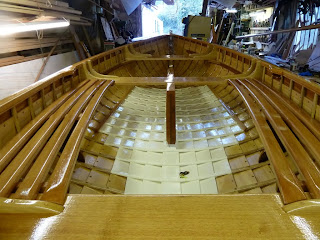 Marcus had a couple of other interesting boats in his workshop, the first is a Fowey boat, built as a tender for the pilots, she has a lot of volume in the stern as these boats were typically sculled out to the pilot boats, and so needed the extra buoyancy astern to counter the weight aft. 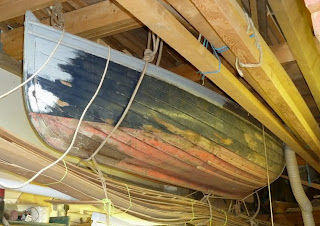 On the other side of the shed was a Fal working boat, used for dredging oysters in the protected fishery where engines are not allowed. The anchor would be dropped and then boat would be hauled across the oyster beds pulling the dredge. Marcus admits to owning the boat for 30 odd years and it is awaiting its third rebuild. 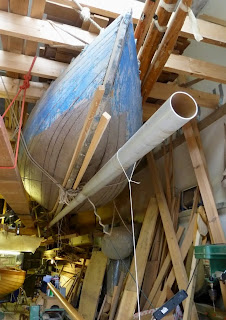 Marcus pointed out other differences between the two craft, the Fowey boat is clinker and the Fal boat carvel. He suggested the latter was probably made from off cut plans left over from building larger Falmouth built luggers. 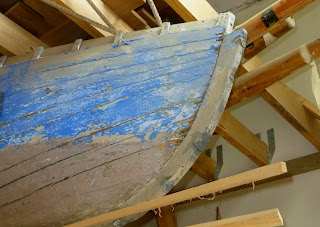 Looking at the random thickness of the planks it’s easy to see the logic. The Fowey boat by contrast being clinker built has to have neat and equal width planking as the plank shapes strongly define the lines as shown here on his Mayflower Dinghy. 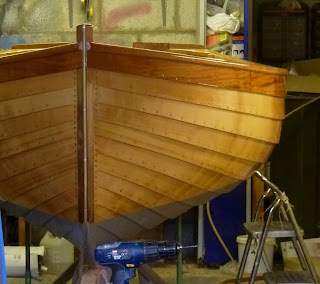 If you get the opportunity to meet him, Marcus is a very nice chap, generous with his time and hugely knowledgeable about traditional boats, he was also very relaxed as Joe waved a screwdriver around far too close to his immaculately varnished show boat. Here Joe is showing an early interest in wooden boat construction, the small saw horses are actually coffin stands. Mum looks pretty relaxed too although I'm not sure I could persuade her that we need another dinghy, even one as lovely as this. 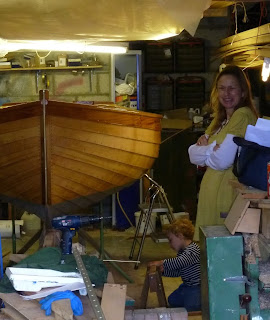