I confess to being a bit of a petrol head and in particular for big American V8's so when we saw a classic car show advertised at a down town lake side park we went along. 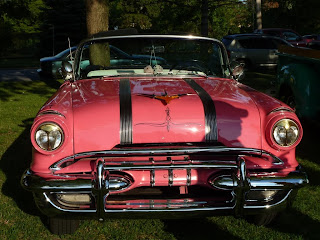 Sarnia isn't that far from Detroit, the US car capital and Motown so there was no shortage of classic muscle cars plus more than a few stunning custom cars and hot rods. 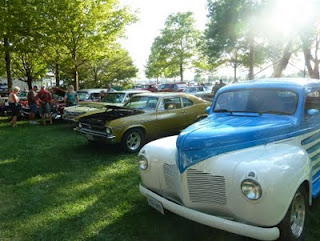 The event was organised and run by the Sarnia Street Machine Club as a charity event in aid of the Pathways Health Centre for Children. What was especially delightful was that the event was free. Parking was free for both exhibitors and visitors (pause for gasp from my UK readers) there was even a band using the municipal open air stage facilities. Around 100 cars were on display their owners bringing them along to support the event and all the money was raised by donations. 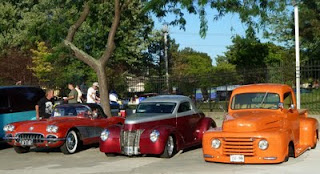 Along with the Corvettes, the GTOs and Dodge Charger (OK so the purists will tell me the Vanishing Point car was a yellow Challenger), no gathering of muscle cars would be complete without a Mustang, you almost expected to see Steve McQueen driving, he was co star to the Mustang in the film Bullet. 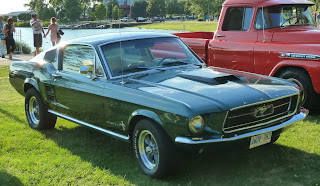 This Model T based hot rod looked like it really had seen action on the Bonneville saltflats back when the custom car scene started. No mudguards, white wall tyres, open header exhausts and what look like drum brakes. 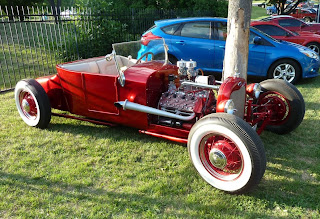 Joe (well actually his Dad who has always wanted one) took a shine to this VW based beach buggy, the owner very kindly invited him to try it out for size and he seemed to like it. Hmm maybe that's the excuse I've been looking for - next year's winter project? 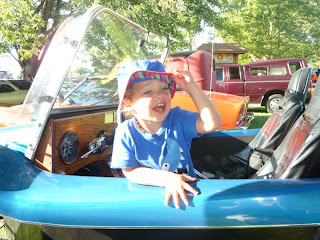 What a great event and a great, really friendly bunch of people.
Posted by Bursledon Blogger at 07:08