A waterspout tore up the Fowey River while we were there, it was dark, but from our balcony it was possible to make out the concentrated centre where the wind was shrieking, blowing over dustbins on the shore and shaking masts in the harbour as it passed.
The next morning revealed this yacht had broken free from it's mooring and been driven up onto the shore in Pont Creek. 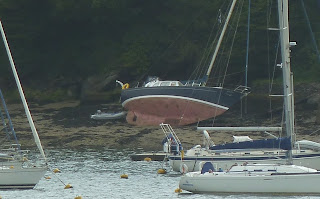 Fortunately it was a sturdy full keel design and had missed the rocks along that piece of shore to settle at a place which is fairly steeply sloping shingle. 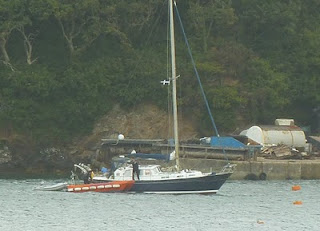 The Fowey Harbour Master crew were quickly on hand in the morning and the yacht was floated off on the afternoon tide and taken back to a mooring.
Posted by Bursledon Blogger at 04:57