Nice, on a sunny spot near the hard. 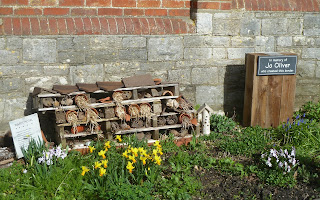 Over ten years ago Jo apparently, approached Fareham Borough Council stating the strip of road which goes past some pretty cottages, looked tatty and unkempt.

The council told Jo they only had £11 in their budget to maintain the land, but said she could work on it herself if she wanted to – and that’s exactly what she did.

For the following decade, Jo, a keen gardener, planted blossoming blooms in the strip to make it look more attractive to passers-by. Now, half-a dozen-ladies maintain the site.

The plaque reads ‘In Memory of Jo Oliver who created this border.’
Posted by Bursledon Blogger at 06:30