Piracy on the Hamble has been virtually unknown for a couple of hundred years or so, although there was a spate of outboard motor thefts a few years ago and back in the early noughties, the notorious one legged boat burglar was caught and convicted on unambiguous CCTV  evidence.

Just recently there has been increase in reported sightings of the gentlemen and ladies of fortune. 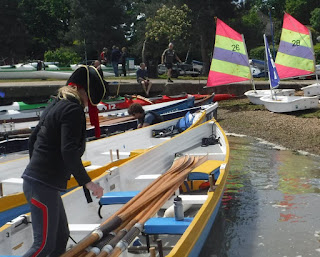 It started with the Hamble river raid, one of the gig crew left behind no doubt to guard the boat while the others were ashore for some nefarious purpose.

More recently some unsavoury characters were gathered at the slipway over the bank holiday.

Later seen at the top of the creek with fellow pirates proudly displaying the skull and crossbones, presumably a nice quiet spot to hold a pirate council.

Apologies for the bad photos.
Posted by Bursledon Blogger at 06:30