Brass monkeys, icicles, puddings, word games about blackberry's but what about the boats? Well there was a reference to kite boards, but it's not the same thing. So there I was thinking about interesting boats which might make an worthwhile post when a local boat motored up the river, a boat which is worth mention. 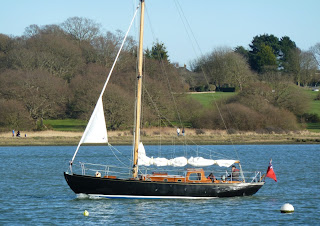 Tar Baby was built by Camper and Nicholson in 1939, and was for a time owned by the Nicholson family. For as long as I can remember Tar Baby has sailed from the Beaulieu river and is often see around the solent or heading for the west country during the summer. 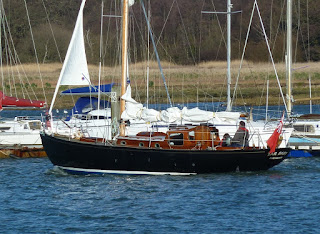 The hull shape reminds me of the popular Nicolson 32, which was built in grp and which Tar Baby pre-dates by many years. I've always liked the pilot house, I spent several hours making a detailed sketch when we were moored close by some years ago in Fowey during a summer cruise, with the thought that it might be possible to build something similar onto a Nic 32.
Posted by Bursledon Blogger at 06:30