With Joseph's forth birthday coming up we've been thinking about getting him his first boat, well actually it will be his seconds as his cradle was a scaled down clinker dinghy. Inevitable the Optimist figures large in our thinking, with active fleets all along the Solent. 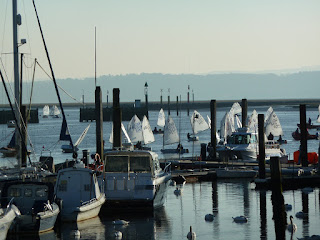 Ironically about sixty years ago boat designer Clark Mills of Clearwater, Florida built a floating version of the "soapbox car". The boat Mills came up with in 1948 was a little square bowed boat called the Optimist Pram. It was a boat which a young skipper and a parent could put together in the garage, with one sheet of plywood, some stainless steel screws, some glue, and a few banged thumbs.

Today the Optimist is the de facto training dinghy, sailed in 120 countries, competitive models run to several thousand pounds not including the support boat from which anxious parents or hired coach deliver encouragement and guidance. 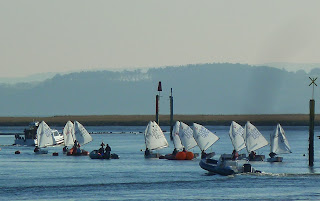 I have to say that spending Saturday morning on the water, watching Joe learning to tack and gybe has a lot of appeal and could be the excuse to buy not one but two more boats!
Posted by Bursledon Blogger at 09:00