The harbour at Hill Head is small and dries so not surprisingly it is home to more than a few small boats which can take the ground twice a day. On a blustery weekend (seems like every weekend for most of this season) we went for a walk around took at look at some of the small yachts. 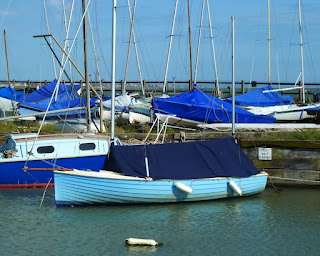 One of my favourites (above) a Devon Yawl a GRP boat based on the Salcombe yawl from south Devon. 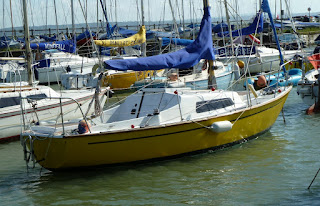 I think this is a Hurley 22 a remarkable little boat first introduced in the early 60's. They did well in the JOG racing and even won in the round the Island race in 1967. A very capable yacht designed by Ian Anderson these small cruisers have been sailed across the Atlantic. 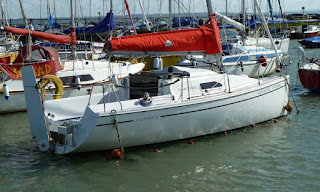 All together more modern, the Huzar 21 is described as a small trailable cruising yacht with a swing keel, packed with a lot of features, facilitating both on-board living and excellent performance. 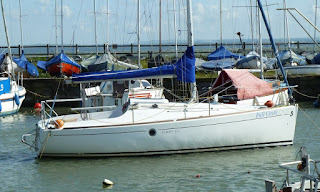 Beneteau First 21- what can I say, if and when the weather improves we might get around to sailing ours! 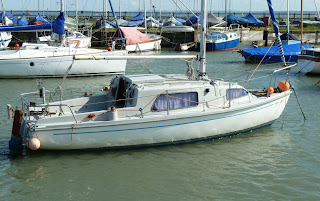 Sea Witch 19 a bilge keeler from the 1960's and 70's, I can remember many years ago squeezing into the Robert Tucker Caprice that we then owned, our neighbour owned a Sea Witch and I was envious of the space and accommodation. Another small but capable cruiser, there's a good account of a 2010 cruise from the East coast down to Cornwall in the sea witch Ladybird on Bill's Log. 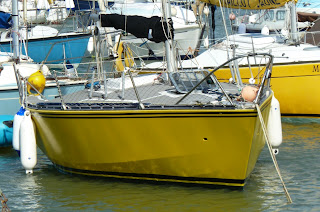 Correct me if I'm wrong but I think this is an E Boat Offshore One Design, a light displacement IOR mini-ton keel-boat with a lifting cast iron keel, designed in 1974 by Julian Everitt. Despite the limited head room i've always liked these boats and on a couple of occasions nearly bought one. This example is called Exocet. 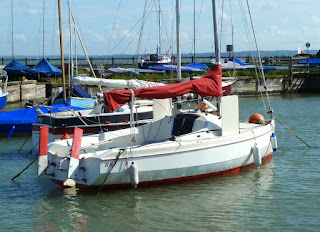 The Red Fox is an innovative design by David Thomas which has twin lee boats, the 200S is a later and more modern version with twin rudders and a revised deck/cockpit layout. The design achieved shoal draft and ease of launching and recovery from a trailer without the intrusion if a keel box and centre board.

There's a lot to be said for small boats like these, cheap to buy and maintain, very capable in thin water and offshore - a lot of fun to be had for those of us with busy lives and limited time to go sailing.
Posted by Bursledon Blogger at 05:34