I've been visiting Cornwall for 30 odd years and thought I knew my way around pretty well, but recently the road between St Austell and Wadebridge was closed and we were forced to take a detour via a village called Roche.

As you come over the high ground in the middle of the county about a mile away you can see this building on a rock outcrop Roche Rock. Apparently the building, dramatically perched on top, is a chapel dedicated to St Michael. 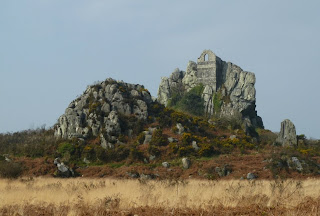 The rock itself is about 600m x 300m and 20m hight, various legends and folklore abound.

One story links the rock to Jan Tregeagle a magistrate in the early 17th century, known for being a particularly harsh land agent, darker stories circulated as well, that he had murdered his wife or made a pact with the Devil, after his death Jan is alleged to have found refuge in the chapel.

In another, the rock features in the legend of Tristan and Iseult, an influential romance and tragedy, retold in numerous sources with as many variations. The tragic story is of the adulterous love between the Cornish knight Tristan and the Irish princess Iseult.
Posted by Bursledon Blogger at 07:56