Is there a sailing boat in there?

This motor boat on a mooring in the Camel estuary got me wondering how much was original and what her history was? 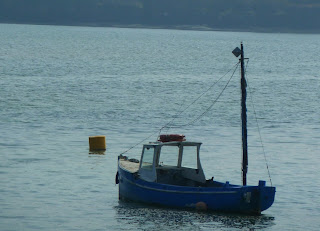 The sheer line and the raised cabin don't match very well, so the latter may have been added sometime after the boat was built. Then assuming the hull below the sheer is original, she was probably built as an open boat, which begs the question was she built as a motor boat?
Possibly she was based on an older local boat with which builders were familiar. Many would have been built by eye and experience. It could equally be that this originally was a sailing boat, converted to engine power and latterly with the addition of the cabin and wheel house.
Perhaps she originally was a Tosher or am I just kidding myself?
Posted by Bursledon Blogger at 01:52