The walk from Beaulieu in the New Forest National Park down to Buckler's Hard follows the unspoiled, wooded river which is also home to some very interesting boats. This delightful sloop looks to have been built between the wars as a performance cruiser. 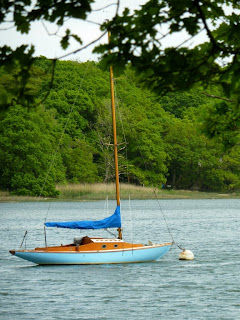 A great place to stop and rest is Buckler's Hard, the Georgian Hamlet is largely preserved as it was in the day when ships for Nelson's Navy were built there, although the web cam (see Bucker's Hard link) is relatively new. 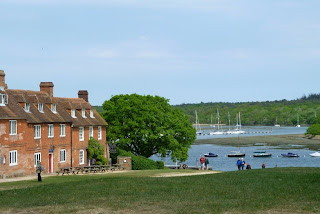 It's also a yachting center and while walking around the trailer sailor park we spotted this interesting boat, clearly new with a bright shiny brass stem band. Just visible under the cover are wooden spars which suggest a traditional rig, but the hull although tradition in many ways clearly has many modern touches including that high aspect rudder. Sadly there were no identification marks so it remains a mystery boat about which I'd like to know more. 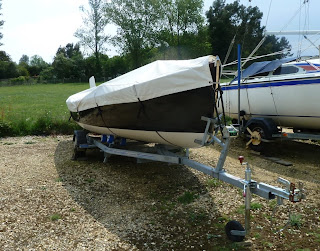