I'm getting a bit behind with postings as we're now in April. With the combination of the March Spring Equinox and the moon being at it’s nearest point to earth in over 20 years ,we had some big tides not to mention stunning views of the moon thanks to the high pressure keeping the night time skies clear.

The combination of high pressure and light northerly winds means we haven’t suffered the very big high tides that we’ve seen in past years, but the low water levels have revealed parts of the river seldom seen. 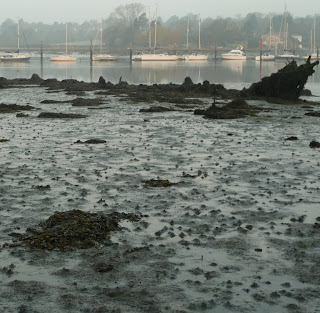 Sadly I had forgotten to take my camera along for my early morning run and by time I returned the tide was flooding, but there was still a goodly extent of Hamble mud to be seen.

This Cornish Shimper is a new arrival on the river or at least new to this mooring. Although a modern boat in all respects, designed by Roger Dongray in the late 1970’s or early 80’s she has strong links back to work boat heritage and looks right at home on her mooring at low water springs. 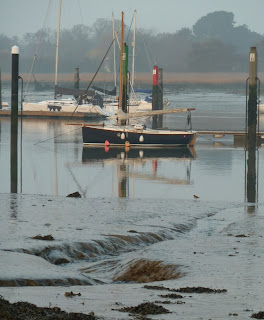