It was one of those days, we were just having a cup of coffee down by the port, enjoying the sunshine. You look over and you see an interesting looking boat at the quay. 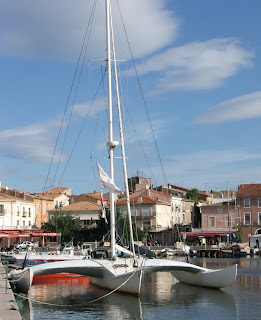 It's a slow day, so when you eventually finish your coffee, you might as well walk over to have a closer look.

These big trimarans were popular with the offshore racers in the 1970's and 80's, and that curved bridge deck looks very familiar. 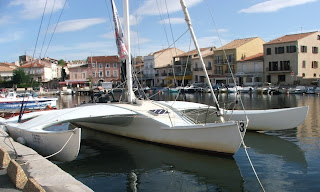 The name on the stern is unmistakable, but is this really the same boat? 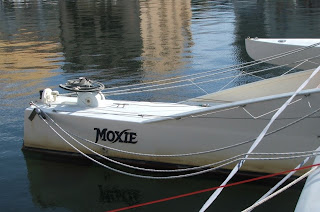 Moxie was and is a Dick Newark designed trimaran, which skippered by Phil Weld, won the OSTAR - single handed trans Atlantic race in 1980.
Dick has been designing fast sailing craft for more than a few years and is famous for saying "People sail for fun and no one has yet convinced me that it's more fun to go slow than it is to go fast".
To prove the point there's a great clip on Dick's web page showing Moxie doing 16 knots. There's also a great section with someone sitting on the steering quadrant (pic above) while she scoots along under self steering - fun but not reccomended!! 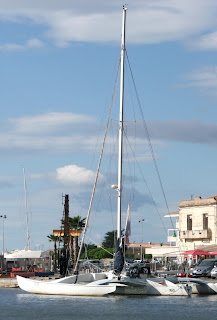 Currently she's based in the delightful port of Meze in the Languedoc region of France and operates as a charter boat.
Posted by Bursledon Blogger at 11:30