Tillerman challenged the sailing blogger community to write a story about "Love and Sailing" this month.

Our story started twelve years ago. Erica and I had known each other for just over a year, when I had the crazy notion to put my career on hold and sail across the Atlantic and back. We were fortunate, as I owned an old, but tough Van de Stadt 34, Blue Clipper which was up to the task.

Erica's longest sailing trip at that time, had been 50 miles, downwind from Weymouth to the Solent in near perfect conditions. So, I was even more fortunate that she had no hesitation to coming with me.

We spent the winter preparing the yacht, buying equipment and extracting ourselves from our shore side life. People often tell me how lucky we were, I always recall the dark December day when I hung upside down, cleaning 27 years of dirt from the frozen bilge, with nothing more than a 2 hour drive home to follow - plus our course Erica's company to keep me going! 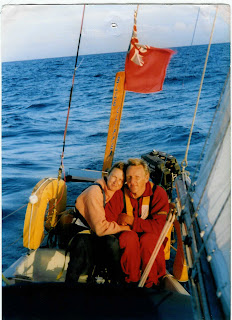 We left Portsmouth in June 1997 sailing down the western approaches and out into the Bay of Biscay with it's awesome reputation. Biscay crossed, we made our first trip 500 NM out into the Atlantic, finding the island of Maderia roughly where it should be. Then on to the Canary Islands, Gambia in West Africa, before crossing the Atlantic, arriving in Barbados just in time for Christmas.

Sailing the islands was wonderful, south to Trinidad and then north to the Virgin Islands with all the Windward and Leeward islands in between.

It wasn't all plain sailing, we had storms and huge waves, the odd shark had come too close. Equipment had broken a thousand miles from land, in light airs we'd hand steered for ten or twelve hours a day, day after day, under the tropical heat, trying to maintain our speed. Through it all Erica never faltered, she was always there, punchy and positive. Her trust in me was implicit, that trust might have been a burden, but it wasn't, I just grew to love her all the more. 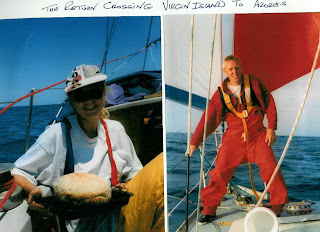 A mountaineering friend joined us for the homeward leg, between the Virgin Islands and the Azores. It was nice to have an extra hand for the 24 day crossing, especially during the night watches. But it was an intrusion, the yacht, our journey and our life together had been so complete, that having someone else share didn't seem quite right.

When 0ur crew flew home from the Azores as arranged, Erica and I wandered those magical mid Atlantic islands hand in hand, for a few weeks, before heading off for the last leg of our trip back to Falmouth and home.

In 2000 we got married, for some reason a television company had got hold of our story and made a short program of our trip, it was a pilot for a series called "The Things we do for Love" hosted by the late John Peel and went out on Meridian TV. Our honeymoon - of course we went sailing.

This year Joesph was born and we're still sailing, maybe not as much as we used to or as much as we like, but of course I still love Erica just as much 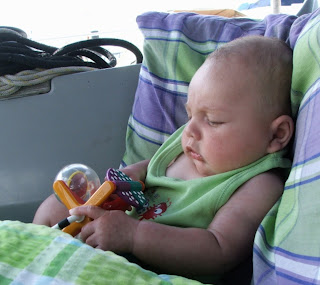