Well OK, actually she’s Plymouth registered, but since she’s a Warsash One Design I consider that local enough.

I’ve always thought of the Fred Parker - Warsash One Design as a Folk boat with a counter stern, which might make me slightly unpopular with the class owners. 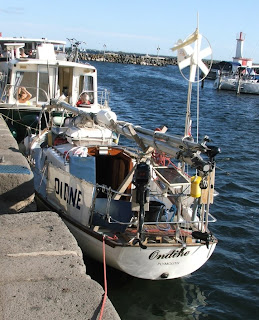 Ondine had just arrived in Marseillan, John, her owner had sailed her down the Atlantic coast of France, from his home port in Plymouth, and then from Bordeaux made a transit of the famous Canal de Midi which exits into the Etang de Thau just to the west of Sete.

These 28 foot craft are undeniably tough, Sherman Wright sailed a heavily modified one, Andromeda in the 1996 Single Handed Trans-Atlantic Race (STAR) and again as an unofficial entry in 2000. Another WOD Vacuum with Junk rig, was prepared for the 2006 Jester Challenge but pulled out before the start. 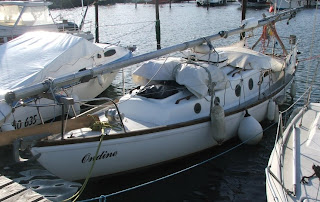 Currently Ondine is laid up in the little local marina for the winter, while John gets her ready for some cruising around the Mediterranean in the spring.