After the post about Suhaili (and I suspect a little mention from Messing About in Sailboats) my little blog received a huge increase in hits, so thank you everyone who visited and I hope you found our quiet corner of England interesting.

One of the things I like about Bursledon is the connection with the history of yachting. Just a few yards from Suhaili is China Blue of Hamble. This boat isn't quite as famous as Robin Knox-Johnston's ketch, she is from the same tradition of English Corinthian seafaring. 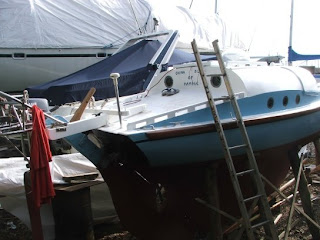 China Blue has been ashore for a few months, but last week I was lucky to find owner Tim hard at work getting ready for the Easter launch. She is a sister ship to Jester a reworked folkboat sailed by Blondie Haslar, which he developed for single handed sailing. Radical features were the completely enclosed accomodation (slightly reminiscent of a world war two nissan hut) and the Chinese Junk Rig. The combination of these two elements allowed the boat to be sailed from the comfort of the cabin and was a major safety feature offshore.

Jester was one of four entries in the very first OSTAR - Observer Single handed Trans Atlantic Race in 1960, legend has it that the race was founded on a bet for "half a crown" (two shillings and sixpence in the old UK currency, equivalent to 12.5 pence now) between Haslar and Sir Francis Chichester. Two other entrants, David Lewis and Val Howells joined the race, which ran from the Royal Western Yacht Club in Plymouth to New york (although subsequent OSTAR's have finished at Rhode Island). The original Jester was purchased by Mike Richey after the 1964 OSTAR and raced in subsequent OSTAR's until she was sadly lost, although Mike survived the sinking. 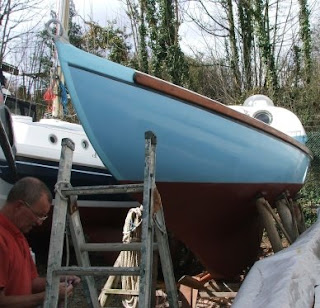 China Blue was built at Blyth yacht Club in the early 1980's to the same design as the original Jester.

The spirit of the original OSTAR, single handed, self sufficiency has given way over the years to huge sponsorship, huge budgets and technical sophistication. As a counter measure and to build on Blondie's original intention a new race has been formed "the Jester Challenge". In a bid to recapture the very essence of ocean voyaging, there are no entry fees, no judges, no committees, no scrutineering, and no real limits, with the exception that all boats taking part should be under 30ft.

Tim has sailed four OSTAR's himself and is preparing China Blue for the 2010 Jester Challenge. He was also unaware that Suhaili was only a few yards away and took a break from his work for a photograph by the famous yacht. 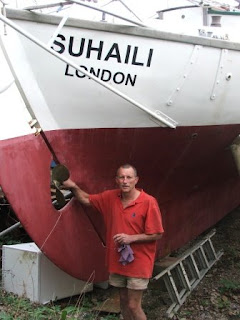 I also learned from Tim, that Blondie lived locally, just across the river in Swanwick, before moving to Bursledon and then Curbridge a small village at the top of the river.