Whats in a name? 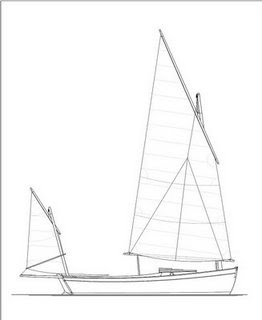 Well actually quite a lot.

I was recently in discussion about a prize that is to be offered for the first “Yawl” to finish a race for traditional and working boats.

Sounds pretty simple, because most sailors know what a yawl is, right? Well maybe not.

The yacht club bore piped up "what's the problem, a yawl has the mizzen aft the rudder stock, a ketch has it forward !"

Well that may be a widely accepted definition, but if we agree that premise, then no boat with a stern hung rudder could be said to be yawl rigged – where would the mizzen go?

Since the prize was offered by the family of someone who famously sailed (well famous in local circles) a yawl rigged working boat of precisely this type, that couldn’t be correct.

Perhaps one of the most famous of this type of working boats is the Falmouth Quay Punt - stern hung rudder, therefore the mizzen must be forward of the rudder post - sorry can't be a Yawl - hmmm.

More curious still, take the Salcombe Yawl – oops that too has the mizzen forward of the rudder – what a dilemma, maybe they need to rename it the Salcombe Ketch!!

Given that so many English working boats had both a stern hung rudder and a small mizzen, maybe the position of the mizzen relative to the rudder isn't the whole story. This seems to be confirmed by some further research.

Well that's a possibility which offers more flexibility and accommodates the many traditional working boats with the rudder fitted to a transom stern. But, while this description relieves the problem of mizzen location relative to the rudder, I’ve seen plenty of ketches where the mizzen overhangs the stern, so this can’t be correct.

The famous American Naval Architech Francis Herreshoff appears to support the view that relationship between rudder and mizzen are not critical when he states: “"Yawl had nothing to do with rudder placement relative to the mizzen - a yawl rig is the sail and mast configuration that suits a Yawl boat". A helpful if a somewhat circular argument, but you have to take Mr H seriously.

One of the problems seems to be that the accepted use of "Yawl" comes from the yachting fraternity, where the counter stern has been common place since the beginning of the 20th century. Stepping the mizzen on the counter stern, behind the rudder made sense and avoided all the complicated and un-yacht like contrivances such as a cranked tiller, which is necessary if the mizzen is stepped immediately ahead of the rudder.

This influence from “yachtsmen” was also very strong in America, where Yawls came into prominence under the CCA rating rule in the 1950s. The CCA rule did not measure the sail area carried between the main and the mizzen. This meant that the added sail area of the mizzen staysails or mizzen spinnakers was free of any rating penalty. These designs were most definitely yachts with counter sterns and the mizzen stepped behind the rudder. Memorable examples are Ondine, Figaro, Maruffa, Escapade, Dorade, Sabre and Carina II. All clearly Yawls by any definition. 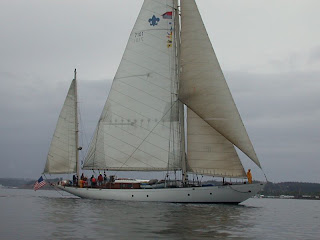 Not surprisingly some designers took things to extremes, Bill Luders created a yawl that had no mainsail and sailed under genoas and mizzen flying sails. It was called Storm, and without a mainsail, it had a very low rating and won everything in sight. This upset the rule makers so they changed the rule to require a mainsail. Next season Luders showed up with Storm — at 44 feet LOA — sporting a mainsail the size of a Laser's. He won again.

Going further back to the early part of the 20th Century, Henry Coleman Folkard, in his book Sailing Boats from Around the World; says of the yawl rigged boat, “the mizzen is stepped further aft (than the ketch) near the stern post - and is much smaller in proportion to the mainsail (in comparison with a ketch mizzen)”.

This seems a most useful definition for our purpose, which applies to working craft and yachts alike.

Coleman Folkhard was enthusiastic about the yawl rigg in his summary "For comfort and convenience the yawl rigg is one of the best and handiest that is known, whether for yacht or pleasure boat large or small” – he goes on to say -“ it (yawl rigg) is admirably adapted for a shooting or fishing yacht; in fact no better rigg is known for either purpose".

Or at least it might be if it were not for the fact that Francis Herreshoff , Coleman and others distinguish between yawl and yawl rigged. If then our definition above describes a “yawl rigged “ boat what then is a yawl?

Warrington Baden-Powell commenting on "canoe yawls" in Forest and Stream, 10/17/1889: refers to -" a double ended boat as used by a man-of-war similar to a ship’s jolly boat or pinnance, normally rowed by four to six oars".

He continues "The term yawl has nothing to do with rig; it is an indefinitely old sea term for a sea-coast model of boat which was of long form and light construction, used for both sailing and rowing, without fixed ballast; such boats to this day are the Yarmouth yawls, the Norway yawls and the coble.”

"A work on naval architecture of 1793 describes the 'yawls' carried then on men-of-war 'for sailing and rowing' (like this one on Gavin Atkin's In the Boatshed Blog)as practically of a form we should now call whaleboats, i.e., sharp at each end; and further, the same authority says of the Norway yawl: 'Of all such boats this yawl seems best calculated for a high sea; it will venture out to great sea distances when a stout ship can hardly carry any sail."

In conclusion are we agreed, the yawl being a type of boat while yawl rigged describes the sail plan which accommodates both yachts and working craft? 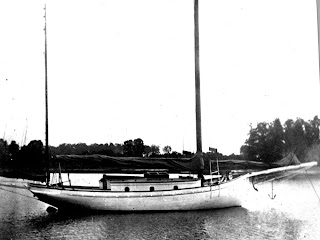 And finally my favourite is “Favourite” a “Whitstable Oyster Yawl” which is certainly not a rowing boat. Nor according to the restoration team is it yawl rgged.

“Favourite is an oyster yawl. The rig, perhaps surprisingly, is a gaff cutter and not a yawl which would usually mean a second smaller mast abaft the rudder post. As far as we know few, if any, of the Whitstable oyster yawls had a second mast rigged as a true yawl. We do not really know the origin of the term yawl in this usage - can you help?"

If you have comment or input on any of the above I’d be delighted to hear from you.