A recent post on the Messing Around in Sailboats blog recently reminded us that 2009 is the 40th anniversary of the Golden Globe race, the first around the world, single handed, non-stop circumnavigation.

The race actually started in 1968, but April 22nd 1969 was the date when the then young Robin Knox-Johnston became the first man to circumnavigate the world non stop arriving in Falmouth after 312 days at sea. Knox-Johnston famously and to his absolute credit, donated his £5000 prize to the widow of fellow competitor Donald Crowhurst, who had tragically committed suicide during the race.

So what you may ask, has that got to do with this blog? 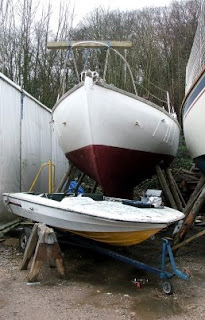 Well, while my own boat has been ashore in a local boatyard over winter, I've been walking past this slightly sad looking yacht.

No clearly not the yellow and white run-about in the foreground.

Those of you familiar with Knox-Johnston's Suhaila will find her if not instantly familiar, certainly recognisable. 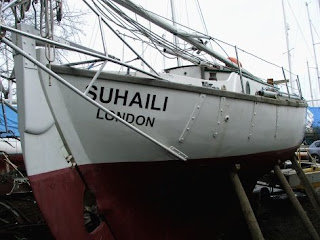 And here's the proof point.