Talk about the weather

Talking about the weather is a very English thing and the past weekend certainly gave us something to talk about.

Saturday morning, fine and warm hinted at a nice day in prospect. I was busy with other things, so by the time I got down to the boatyard in mid afternoon it had turned cloudy and cold, a chilly wind had set in. 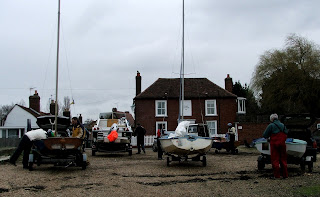 I walked home past the hard just as the members of the Dinghy Cruising Association were recovering their boats. 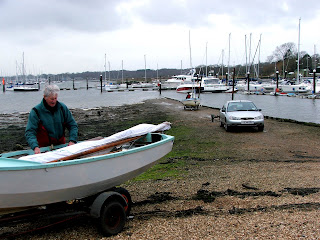 The small party consisted of a couple of Wayfarer's, two smaller boats which looked like Wanderer's (the smaller 14 boat also designed by Ian Proctor) and a Mirror dinghy.

DCA members had travelled from Guildford, Farnham and Bordon. Launching at Swanwick Hard up by Bursledon Bridge. They sailed, down the Hamble River and across Southampton Water to Calshot , returning a couple of hours after low water to recover their boats. 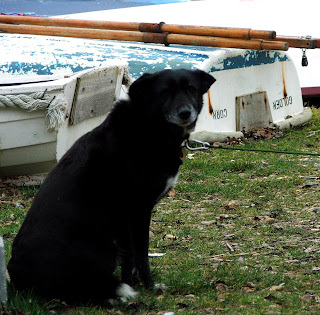 Gem the dog waited patiently while the boats were loaded onto the trailers.

We woke in the middle of Saturday night to hear rain lashing at the windows and the wind whistling down the chimney as the forecast gale swept through. Then Sunday morning dawned with clear skies and bright sunshine, so I took the opportunity for an early morning row down the Hamble. 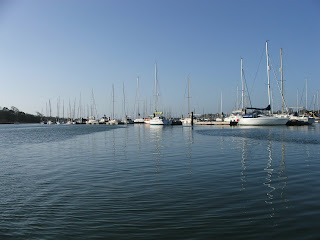 The river was deserted apart from a few Sunday morning race crews getting their boats ready to race in the aptly named RSYC Frostbite Series.

Some of the local wildlife were making the best of the day; a group of crows had found a comfortable spot perched on top of the masts of a few boats in the river. These boats were all moored where a bend in the river gave them shelter from the wind. The crows were perched at the mast heads, high enough to catch the first rays of the low winter sunshine as the sun rose over the nearby woods. I counted 14, one or two per boat, of these clever crows.

With the rowing boat put away, I’d worked up something of an appetite so we went down to Stokes Bay to one of my favourite cafe's for a very late breakfast. On the water the local Laser fleet from Stokes Bay sailing club were out in force and enjoying the brisk conditions as the clouds which signalled the next depression swept in. 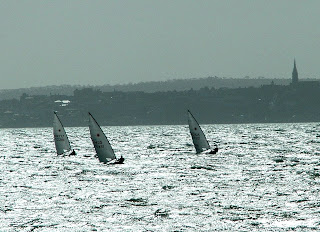 The local forecast was rain by 13.00 as the tail end of a depression whipped up from the channel, sure enough at one fifteen it started raining, by then we were sitting comfortably indoors.
If our weather was mixed, have a look at thye posting on South West Sea Kayaking just down the coast in Dorset.
Posted by Bursledon Blogger at 16:12