Back in the Water

One of the good things about living close to the boatyard, is being able to take equipment off the boat and store it safely for the winter. Here's my father-in-law wheeling the main mast back to the boat. It's been in the garage since November, safe and dry. With four new coats of varnish as a "touch up" over winter, the spars are looking really nice (see post Winter Work). 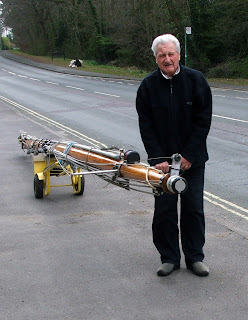 Greta is a Cornish Yawl, built by Cornish Crabbers she was in fact the prototype which was owned and fitted out by the designer Roger Dongray and exhibited at the Earls Court Boat show London in 1988. Over winter she's been ashore at a local boatyard where I replaced the cutlass bearing and repacked the stern gland along with the normal winter work of polishing and anti fouling. 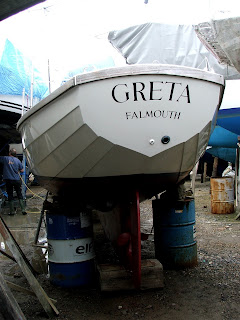 When we arrived with the mast, Greta was already on the slipway, there was a big spring tide and the yard was taking the opportunity to launch as many boats as possible ahead of the upcoming Easter weekend. 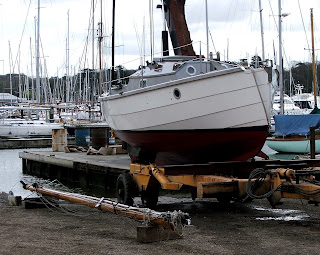 Just as I was motoring her down the river to her berth there was an unexpected hailstorm and of course I had forgotten my wet weather gear. I got completely soaked. However the sun eventually came back out once she was safely on her mooring. 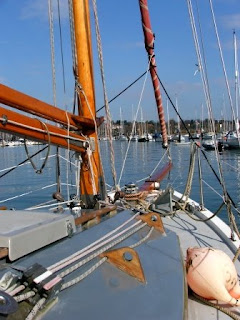 This is Greta at the end of last season, one of the really frustrating aspects of a counter stern is the water splashing over the boot line staining her otherwise gleaming topsides. This year I'm going to make much more of an effort to keep her well scrubbed. But then again I might just go sailing!!!