Craft beers are hugely popular everywhere and more so in the US. Faced with a choice like this the first pint just had to be "Surly Todd the Axeman," which wasn't half bad or is that good. 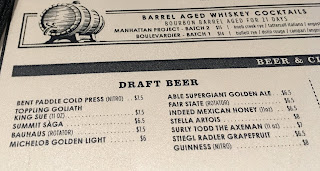 In solidarity with our German colleague Otto, Bauhaus was next up, maybe under similar naming convention to Axeman it might have been called "Walter Gropius the Bad Ass", but in any event it was very modern and very good.

Over a couple of days we tried most of these except familiar Michelob, Stella and Guinness and the Stiegl Radler Grapefruit which was just going too far.
Posted by Bursledon Blogger at 06:30