Well actually strictly speaking it's the second, his first was a scaled down dinghy which I made as a cradle when Joesph was first born. Plus last year Joseph decided to take over Erica's kayak, but this is his first real boat. 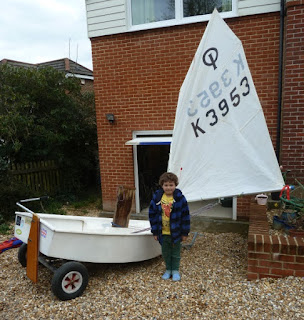 He tells his friends he "won it on ebay" as he still hasn't quite understood that dad had to pay for it.

The first time out it was pretty gusty, even in the river, but capsize was avoided and there was some great fun reaching up and down.
Posted by Bursledon Blogger at 10:02