I had to do a double take when I spotted Les Powles epic cruiser Solitaire berthed in a Lymington marina recently. It was probably about 20 years ago that I read about Les, then I think in his 70's sailing into Lymington following his third circumnavigation. 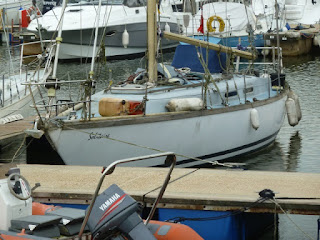 It was reading accounts of people like Les and others which gave me the confidence to sail my own modest Van de Stadt34 Blue Clipper across the Atlantic and back.

Les started sailing in his 50's in a home completed Bruce Roberts 34, one comment I recall was that he thought sailing would be the best way to carry himself and a set of golf clubs around the world.

His book Solitaire Spirit: Three times around the world single-handed looks to be worth a read. From the news paper reports Les was still going strong in 2015 aged 90.
Posted by Bursledon Blogger at 05:30