Thirty years ago Howard's Way burst onto our screens, a TV saga about everyday yachting folk in the fictional village of Tarrent (Bursledon in reality), the BBC's response to Dallas.

The opening title featured "the Flying Fish" a yacht owned by Tom Howard of the title, although it's starring role was short lived as I recall an early episode where Tom's son Leo went off in a sulk when it was announced that the Flying Fish was going to be sold to fund the purchase of the Mermaid  (Elephant) boatyard

So imagine my surprise when I spotted this while rowing down the river, I guess it's the same boat fully restored after sinking during a collision a few years ago. 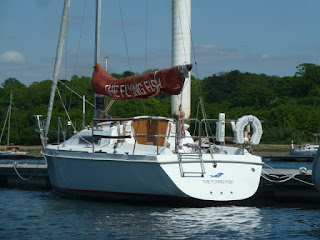 Have a look at the opening sequence from about 50 seconds in I'm pretty sure it's the same Flying Fish a Laser 28.

If you missed Howard's Way just or you want to get an 80's fix, the entire series 1-6 is available as a boxed set DVD on amazon.
Posted by Bursledon Blogger at 07:53