I took the header photo nearly 10 years ago, having just bought a digital camera I pretty much pointed it at anything and everything and was amazed at the detail from the boats in the river right across to buildings in Cowes. 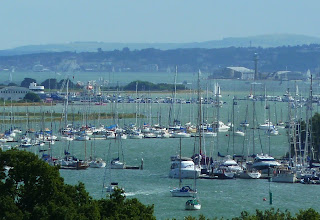 I couldn't quite remember where I'd taken it from, so while I was cycling along the road above Hackett's Marsh the other day decided to see if I could recreate it.

The first problem was that the trees had grown a bit during the interval and being summer were thick with leaves. 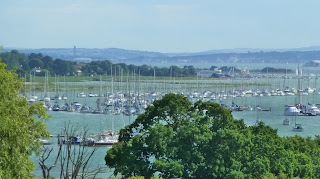 That said the top picture shows Warsash , the black and white striped building is the harbour office, to the right of the picture is the aircraft hanger and the old coastguard  tower at Calshott on the other side of Southampton water and away in the distance Cowes where you can see the Red funnel ferry.