Down at the Bursledon Brickwork Museum the Hampshire Light Railway was having a bit of a slow time on Sunday, the overnight temperatures had dropped below freezing so it took a while to get the pipes thawed out and water to the boilers.

While we were waiting we watched this traction engine which was doing slightly better,  heading off for an excursion. It was built by Garratt's of Suffolk getting on for 100 years ago and looking none the worse for her age thanks to some meticulous care from her owner. 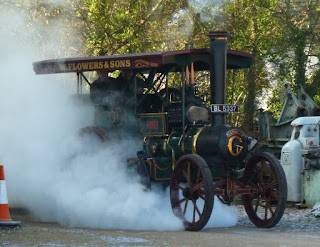 An electric engine was called into service to pull the 7 1/4" gauge train which was very popular as always with Joseph and the young driver who had recently turned 16 and passed his train drivers test. 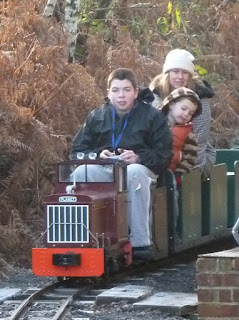 Eventually steam was up  and it was time for a ride with Wendy the blue engine, the configuration with an engine at each end is because the track is there and back until a loop is constructed. The green engine is interesting a Simplex from around 1926 and petrol driven, apparently used in the construction of the original Winchester trunk road. 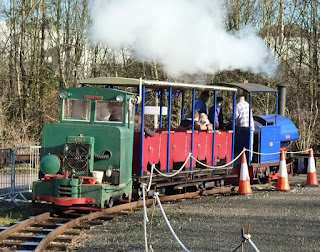