I took this shot on an overcast and cloudy morning a while ago and forgotten it. When I was looking through recent photo's I didn't recognise where it was. 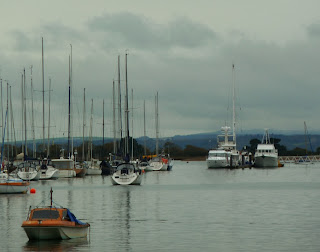 The photo was taken at maximum magnification and although it's a very familiar part of the river, it's not a view one would normally see, plus the close cropped telephoto image had extenuated and foreshortened the Isle of Wight in the distance which almost look mountainous - or perhaps I just have a vivid imagination.
Posted by Bursledon Blogger at 10:30