An interesting dinghy from the early 1960's designed and built in response to Ian Proctor's Wayfarer which was proving to be a reliable cruising dinghy. Designed by Illingworth & Primrose and built by Martin Goacher boat builders, the Tricorn featured as a favourable test report in the 1962 Light Craft magazine. 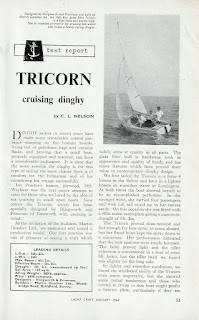 Stability and comfort do not seem to have compromised performance and the small cuddy appears to be a useful feature which blends in well with the overall design. 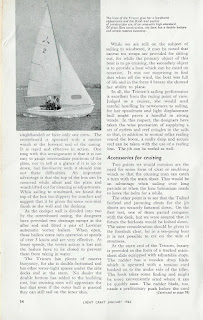 The lines look modern with firm turn at the bilge and a fairly flat run aft. Apart from a few niggles over a few of the construction details the Tricorn looks to have been a capable cruising dinghy. For whatever reason the Tricorn wasn't a commercial success, one turned up on ebay a few years ago, perhaps it was lack of marketing on the part of her builders, maybe the appeal of a cruising dinghy such as this was over estimated, whatever the reason, they are few and far between. 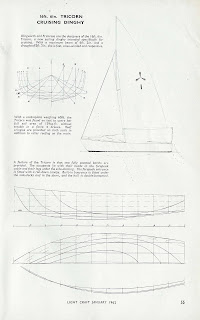