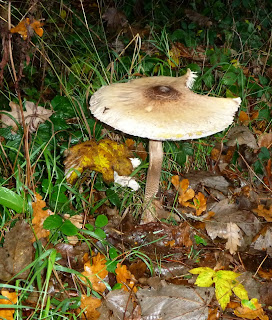 This monster toadstool (or maybe it's a mushroom) was growing at the side of the road, it's about ten inches in diameter. I've tried to identify it on the internet without success so I don't know if it's edible or not, I hope so as it looks as though some passing animal has taken a large bite.
Posted by Bursledon Blogger at 07:58