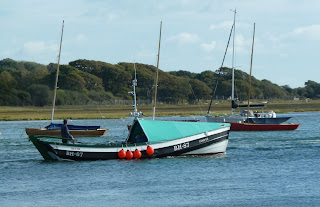 She has the look of a cobble which are traditional craft that worked the stretch of North Sea coast between Newcastle Upon Tyne and Berwick Upon Tweed. Cobbles were often worked from the beach. The canvas foredeck should keep her dry and provide some shelter. I estimated the length at 30 feet or so.
Later in the day we saw her in the distance fishing off the Head Buoy out in Christchurch Bay.
Posted by Bursledon Blogger at 02:44