Back in the Day

Clearing out the loft I found some old 1976 vintage copies of Practical Boat Owner, it was claimed to be Britain's best selling boating magazine. 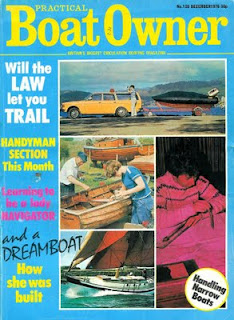 In complete contrast to modern journals most of the magazine was printed in black and white with some very grainy monochrome photography. There were exceptions, some very nice line drawings and occasionally as the example below a few delightful watercolour illustrations, this one of a Norfolk One design dinghy as part of a series on dinghy sailing. 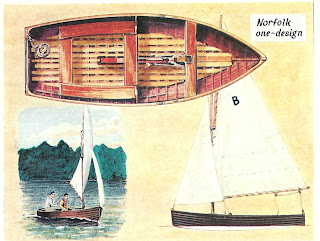 Back in the switched on 70's there were sideboards, flared trousers and some really dodgy barnets (translate that Google), not quite sure where Helly Hanson were going with this one, why is she draped uncomfortably across the foredeck and why are they wearing oilskins on a flat calm day? 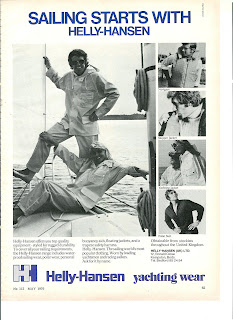 Rockall Sails had their finger on the pulse, or at least an advert designed to raise the pulse rate of some of the magazine's readership. 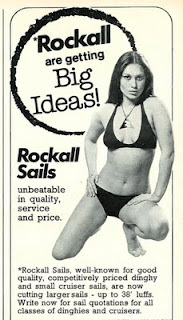 There was a much broader focus to the magazine with coverage of canal and river boats, dinghies and cruising yachts.

As you might expect from the title there was a a great deal of "do it yourself" coverage and advice, everything from building in the briefly popular ferro cement, to wet suits, sails and especially building from kits or a hull moulding which were available from a wide variety of manufacturers. 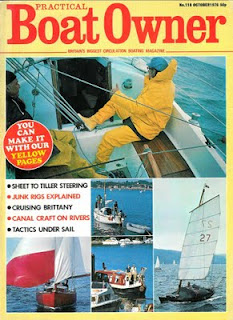 The British Seagull outboard was if not in its hey day still selling strongly, but then again so was the Austin Allegro the only car ever to have been built with a square steering wheel - I kid you not. Quite why Seagull chose to advertise in full colour is a mystery since their engines are entirely monochrome.

As an aside the boat top left below looks like a plywood Silhouette designed by Robert Tucker which has featured in these pages a few time. 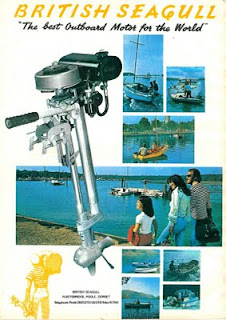 There were some exciting newcomers, like this Streaker dinghy (probably not the first choice of name today) designed by Jack Holt, presumably in response to the Laser and for some reason promoted via a commercial tie up with Tate & Lyle. 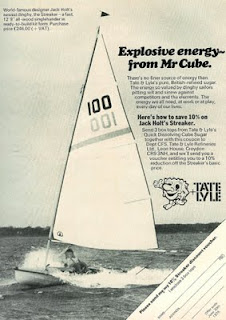 And finally there was this advert featuring Robin Knox-Johnson modelling state of the art wet weather gear, it seems that the intervening years have been relatively kind to Mr RKJ. 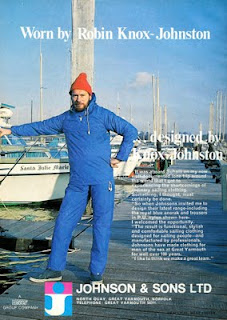 In the long hot summer of 1976, thirty five years ago that was the state of our boating scene, the same year that Star Wars came to our screens, the Sex Pistols changed popular music forever and the UK economy was crumbling - hmmm.
Posted by Bursledon Blogger at 02:41