Although I go to Portsmouth quite often, many of you will recognise the daughter/taxi driver relationship, I don't normally get the opportunity to wander around and have a look about. So when I had to catch the ferry over to the Isle of Wight recently I grabbed my camera and arrived at the old Harbour Station with a bit of time to spare. 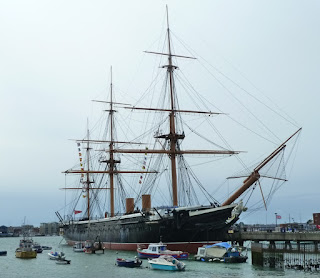 I've seen HMS Warrior many times and have even been on board for a wine tasting, but she never fails to move me. Back in 1861 and for a very few years she was the largest warship in the world and the ultimate deterrent. As with most technological advances although revolutionary in design by 1864 there were faster, larger and more powerful ships with better armour and more guns. 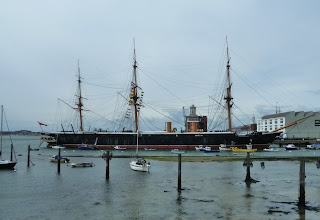 Despite a short career, she was saved from the breakers yard by a slump in the value of scrap metal and thankfully survived as a refuelling barge for many years before being restored.
When you stand on the open bridge above the citadel looking forwards, astern and then aloft you still get the sense of the dominant power she once held.
Posted by Bursledon Blogger at 03:40