With a day off work, we took the opportunity to sit and watch the Friday lunchtime scene on the river, there were more than a few interesting boats about.

First up is our local turbo gaffer, I've written about her before, an interesting mix of classic looks and carbon fibre. 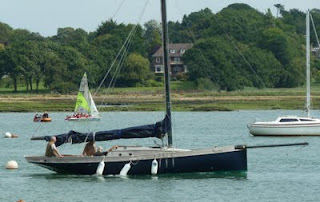 A classic 1970's racer, I think I know what she is and if so, has a very interesting history, however there are a couple of locals with encyclopaedic memories who are all too keen to point out my errors at the yacht club bar, so I'll keep quiet on this one, just enjoy what might have been a 1979 Fastnet yacht. 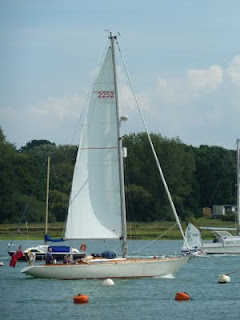 The Royal Southern YC looked to be hosting an Optimist event for the weekend, so there were more than a few out on the river many complete with "mummy boats", although in this case Mummy & Daddy seem more preoccupied with a mooring buoy rather than their little boy. 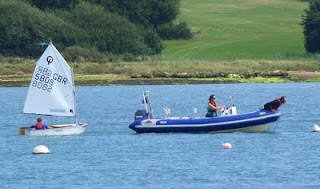 A classic gaff cutter, I think it's Polly Agatha which is a brand new, traditionally built replica of a Bristol Channel Pilot Cutter. Last time I saw her she was painted cream, so I'm guessing that she's had a new paint job for 2011. 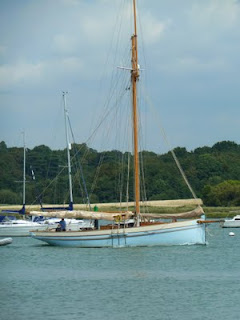 The original Fastnet Race was won by Jolie Brise a Le Harve Pilot Cutter, these days most of the race entries are modern, high tech racers, quite a few of which were returning to Hamble after this year's race which saw the 100 foot supermaxi yacht Rambler capsize after loosing her keel. 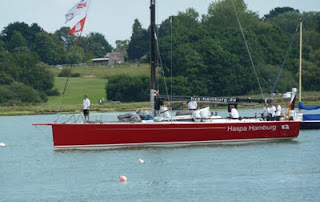 There are quite a few Metre class yachts on the river, this one looks like a modern 6 Meter being towed out of the river. 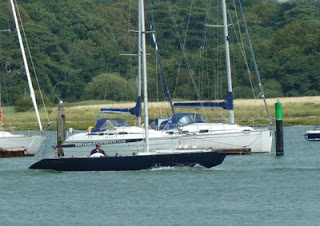 As do these two with a very nice tug boat. A Google search shows that the Royal Solent YC are holding their Taittinger Regatta at the weekend, with 6 Metre entries so presumably they are heading for the western Solent which is where the racing will take place. 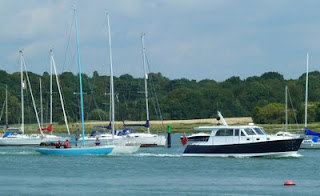 In complete contrast to the Metre boats is this delightful day boat which seems to be rigged with a lug sail and has the look of one of John Welsford's designs, possibly his popular 14' 9" Navigator. 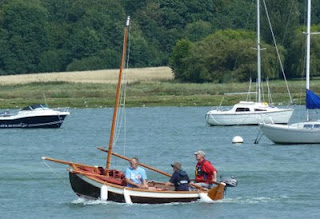