Although only a few miles away it's been ages since we visited Old Portsmouth, but with evening coming on around 4 pm it made an interesting walk, watching the sun setting over the Solent.
Our walk ended on a spit which forms part of the old Camber docks, unsurprisingly there are a couple of pubs, this one the "Still and West" has been reputedly serving local sailors since 1300 or so. 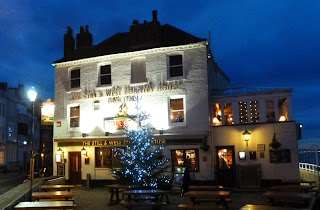 Just next door is the Spice Island Inn, so called as a result of the spice trade ships which would land here as far back as Sir Walter Raleigh's day. Today the pub is operated by a brewery chain, but the façade is much more interesting, the decorative stonework advertises "Brickwoods Brilliant Ales & Stouts." 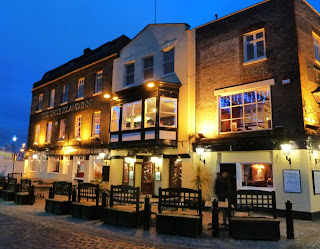 Just across the Camber entrance is Gun Wharf Quay, a development of the old naval docks with the Spinnaker Tower, we've never seen it lit up in colours this this, perhaps its been done especially for Christmas? 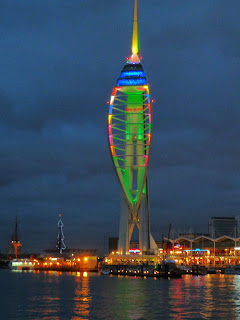 Walking back down the old narrow streets we passed the club house for the Victory Class boats, which have raced the Alfred Westmacott designed 21 foot keel boat from Portsmouth since 1934.

A strict one design and distinctively clinker built, the class has recently introduced a GRP version. However to ensure the longevity of some of the older boats the class is offering these boats effectively free to someone who will undertake to restore and campaign them. 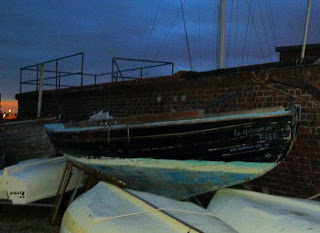