What with the snow and working on Greta before she goes back in the water and the seemingly endless wet weather, it's been two months since I've been out on the water. With a high in prospect for the weekend, and with it the promise of fine, if chilly weather, I was determined to get out for a row.

Of course it's never that easy, the house was frankly a tip, so I spent a couple of hours cleaning and hoovering (is there no end to this man's talents I hear you ask).

Then it was a walk down to the local fish shop to buy some lunch, and of course we kept bumping into people.

Our first surprise was Tony who had moved to Cornwall a couple of years ago, and was back for a flying visit to do a keel repair on another friend's boat.

Just as we were getting away we heard a call from these friends, who were in the middle of anti fouling, the annual ritual of painting the bottom of your boat with nasty and very expensive paint, to prevent barnacles and other marine creatures sticking to the bottom.

Forget the latest Musto or Helli Hanson, this is what the best dressed yachtsman and woman are wearing at this time of year. 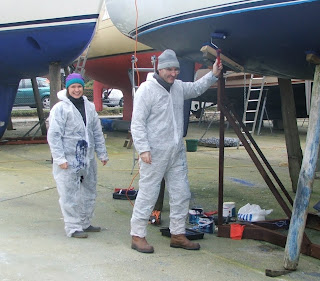 We also stopped by to say hello to Tim and his Folkboat China Blue, about which I wrote last year. Tim is preparing for the Jester Challenge which departs from Plymouth in May this year, a single handed trans Atlantic race. 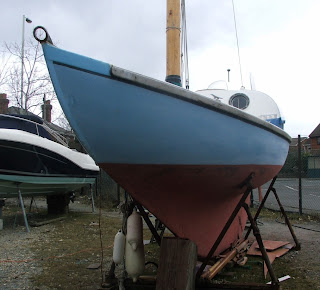 So it was late afternoon before I launched and was ready to go rowing, but not before another friend, Mark turned up. After chatting for a while, I eventually I rowed out, down river under an unsettled sky 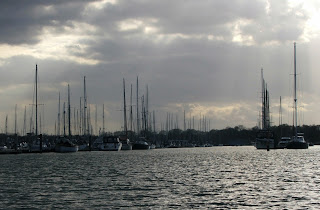 In the event I had a great row, a few muscles reminded me that they had been inactive for too long. As I got back to the slipway at Swanwick hard, the sun came out and the sky had cleared to reveal a beautiful late winter afternoon. Better still Erica phoned to say she had some cookies fresh from the oven. A quick walk home up the hill to a perfect finish with a cup of tea. 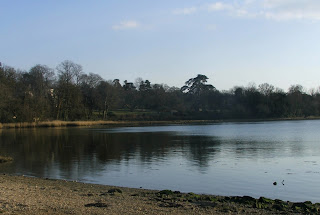